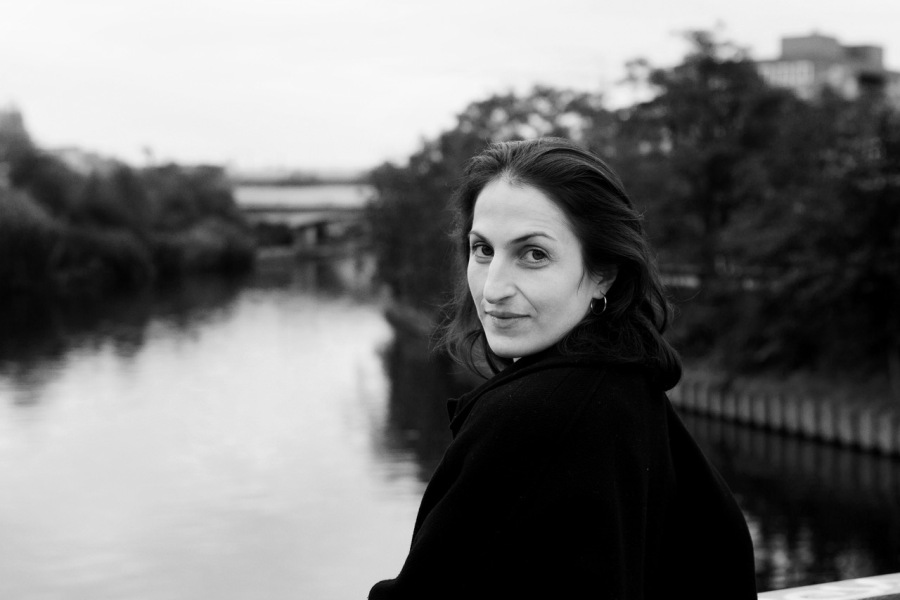 My idealistic theatre doesn’t present certainties, doesn’t repeat stereotypes, but tells personal stories, creates figures and characters with all their ambivalences, so that we can forget all the separating labels and prejudices and find the common grounds.

Azar Mortazavi was born in Wittlich/Rhineland Palatinate and studied Creative Writing and Arts Journalism in Hildesheim. In 2008 she took part in the international Festival Of Young European Playwrights in Utrecht. For her play ‘Todesnachricht’ (“Death Notice”) (world premiere 2011 Pfalztheater Kaiserslautern) she was awarded the Else Lasker-Schüler Playwriting Prize for 2010. In 2011 her short play ‘Himmel und Hölle’ (“Heaven and Hell”) was invited to the inaugural Karlsruhe Playwriting Festival at the Baden State Theatre in Karslruhe. In 2012 she was awarded the WIENER WORTSTAETTEN’s Exile Dramatist Prize. With her second play ‘Ich wünsch mir eins’ (“I have one wish”) (world premiere 2012, Theater Osnabrück, director: Annette Pullen) Azar Mortazavi was invited to the Mülheimer Theatertagen and the Autorentheatertagen Berlin 2013. In 2014 ‘Urteile’ (“Judgements”), a documentary theatre project about the victims of the NSU in Munich created in collaboration with the director Christine Umpfenbach, was premiered at the Residenztheater in Munich.
Her play ‘Zwischenzeit’ (“Meantime”), a WIENER WORTSTAETTEN commission, received its world premiere in 2014 at the Nestroyhof Hamakom Theatre in Vienna. Azar Mortazavi‘s work with the Ballhaus Naunynstraße has concluded the stage adapation of Aboud Saeed’s ‘The Cleverest Person on Facebook’. She was also responsible for the text of the youth play ‘Revolution of Colour’, based on the novel ‘Kara Günlük – Sesperado’s Secret Diaries’ by Mutlu Ergün-Hamaz. This play was invited to the 2017 Theatertreffen der Jugend.

Still Nachbarn
One day Isabell turns up at Leyla’s door, her neighbour from the flat upstairs who has just moved her furious mother into a care home and whose husband suffering from migraine soon turns out to be a ghost.
Leyla lives with Ibrahim, who is not her husband and has other things to do than start a family or go on Mediterranean holidays with her. The fact that he works as a translator in the city’s overfilled gymnasiums and that his naturally dark beard is a source of irritation in the neighbourhood will determine his fate when something happens in the city.
Even before this happens, there is a great deal in the air that cannot be put into words. Nevertheless Isabell takes an enthusiastic interest in Leyla, this arid young woman. Her unexpected visits soon become a daily occurrence. Initially to borrow milk, then bearing a cake and ultimately simply because talking is easier with two and she can recover from sitting speechlessly opposite her mother’s tirades.
A foreign man with a beard. A young dark-haired woman with a German passport. A lonely neighbour who only means well. A sad old woman who transforms her fear into anger one last time.
With powerful concentration and a sure grasp of her characters that eschews any linguistic tricks Azar Mortazavi draws narrative circles that gradually contract like a web, mercilessly narrowing the room the characters have to manoeuvre in the direction of tragedy.
It is an impressive demonstration of how quickly we can turn into strangers, how we become mute if what is most important remains unsaid and what has been said metastasises inside our heads, turning neighbours into suspects and people into categories.
In Mortazavi’s text every fragile bond of intimacy that its characters awkwardly attempt to form dissolves into misunderstanding. Thus in ‘Among Germans’ Azar Mortazavi nails a present-day society by its populist heart, one that looks away when unable to cope with the complexity of world events and attempts to use readymade categories and associations to determine what is alien.
Cast: 3 F, 1 M
Performing rights: schaefersphilippen

Meantime
Maria is visited for the first time in years by her half-sister Mina, who left with her father for his homeland while she was a teenager, leaving behind the small German town, her half-sister Maria and the mother they both share.
After her father’s death she is forced to return to Germany – however, she continues to project her unfulfilled desires onto her father’s distant country that remains with her as a dream.
In the middle of the night Mina suddenly stands at the door of Maria’s small family home: in the meantime she has had a child with her husband Toni. Toni, a lawyer who does not accept any clients because he is afraid of the power of his own words, goes for a walk every night before returning home to dream of the inapproachable Anja, who in turn hopes to be approached by one of the lonely beer-drinkers at the bar. He can sense the exhausted Maria is waiting for him and that the love between the two of them will not last long. The image of a small, successful family that Maria has created to disguise her loneliness shows clear signs of wear that do not escape Mina’s notice.
The characters lost in their own darkness stand opposite each other in the middle of the night. Their dawning awareness of a lack of fulfilment, nourished by desire and cemented by disappointment, determines each one of these damaged life stories which tell of how so much should have been different. In this single night Mortazavi’s text condenses what was hoped for but remains unlived, what has been passed by and cannot be returned into a cool and at the same time intimate study of people who remain free from each other, for whom there seems to be no place that can move them to stay. With disarming poetry the characters bear their surprise that their lives are painful ones through the cold streets at night and the hallways of their apartments that might offer shelter from the darkness but cannot be their home.
Cast: 3 F, 1 M
Performing rights: schaefersphilippen
World premiere: Theater Nestroyhof Hamakom (Vienna)
17. 11. 2014 Director: Hans Escher