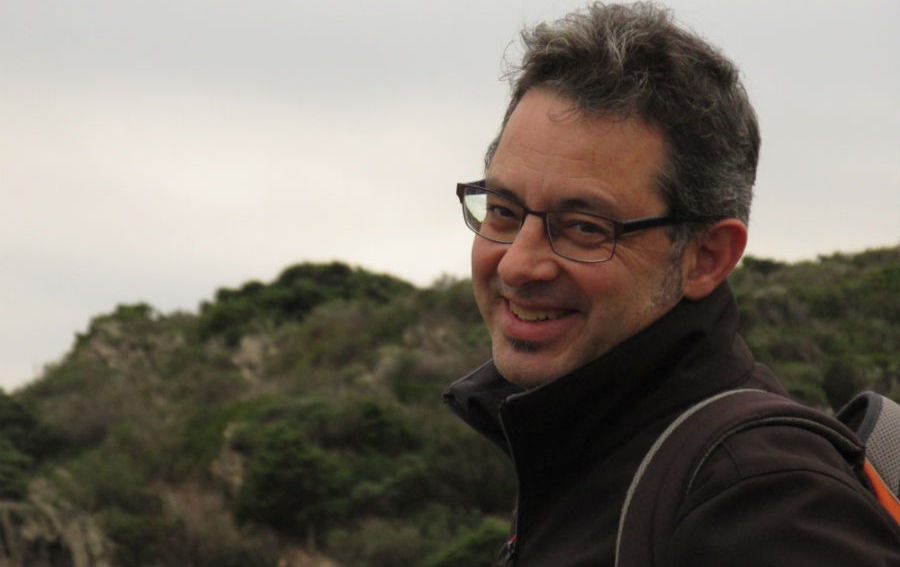 I believe that my theatrical work is always based on a desire for commitment. Commitment to the world and to language. In this sense, my theatre always explores new forms, new staging and dramaturgical considerations, which I propose while seeking the most adequate composition for expressing new contents (new dilemmas, new conflicts, new realities). In general lines, my texts revolve around the problem of identity (personal and collective), around the conflict between memory (heritage, tradition, etc.) and amnesia (the immediacy of the present, immediate satisfaction, seduction by the exotic, etc.), the interplay between cultures, the inexorable passing of time, etc.

You can find a list of my works (with productions, translations, editions, summaries, interviews and documents in various languages) at https://www.escriptors.cat/autors/batllec/obra.php.

Among his works, highlights include Temptació, premiered simultaneously in 2004 at the Teatre Nacional de Catalunya (TNC) and at Vienna’s Burgtheater (since then it has been translated and performed in ten different languages); Combat (1995-1998); Suite (1999, Premi SGAE 1999); Oasi (2001, Premi Josep Ametller 2002); Trànsits (2006-07); Oblidar Barcelona (premi Born 2008) and Zoom (14 d’abril prize 2010). All of these have been translated into different languages and premiered in such countries as Austria, Canada, Chile, France, Germany, Italy, Luxembourg, Mexico, Quebec and Turkey. He has translated French autors such as Jean-Ives Picq, Joseph Danan, David Lescot, Frédéric Sonntag or Marie Dilasser. He has also done adaptations of autors such as Àngel Guimerà, Ignasi Iglésias, Joaquim Ruyra, Samuel Beckett, Pedro Almodóvar, Harry Virtanen or Yesim Özsoy. He was director of l’Obrador de la Sala Beckett between 2003 and 2009 and director of the theatrical magazine Pausa until 2017. From 1998 to 2005 he was a member of the TNC’s Advisory Council. In 2003 and 2004 he was resident playwright at the TNC. In 2004 his text Versuchung was selected for the Berlin Stückenmarkt. He is a teacher of playwriting and dramatic literature at the Institut del Teatre and at the Universitat Autònoma de Barcelona. His doctoral thesis on the symbolist theatre of Adrià Gual won the Premi Crítica “Serra d’Or” 2002.

Combat
Combat has an eight-scene structure, presented as a series of alternating monologues between a woman, known simply as Ella (“She”), and a man, known merely as Ell (“He”). Ell is a young (twenty-year-old) soldier, who has recently enlisted to serve in the war. He spends with her his last night as a civilian, before going off to combat. It is his first sexual liaison and they fall in love. Gradually it becomes evident to the spectator that, in the enigmatic poetry of their monologues, both Ell and Ella are alluding to a shared traumatic event that occurred three months after their first amorous encounter and just a moment prior to the initiation of the monologues themselves. Batlle thus presents the audience with pieces of a puzzle that create an intricately designed structure, in which insinuating elements of an anecdote gradually coalesce only to reveal the full picture by the time the play comes to an end. Death, paradoxically, becomes both the point of departure and the point at which the monologues terminate, thereby creating a circular configuration of infinite repetition.
The plot of Combat is interlaced with a series of ekphrastic evocations of John William Waterhouse’s pre-Raphaelite painting The Lady of Shallot (1888) and Alfred Lord Tennyson’s eponymous poem (1832). Both artistic works, based on a female figure of Arthurian legend, serve as points of inspiration for the fictionalization of reality and the portrayal of a so-called “landscape in the aftermath.” In a literal sense, the “aftermath” here refers to a war that is taking place and to the lives of a man and a woman that are extinguished as a result. Batlle’s play uses the painting and poem as intertextual templates in creating a portrait of a war-ravaged landscape from the perspective of death and anguish. In contemplating the space of this landscape, the spectator is invited to ponder the fluid nature of boundaries, identities, and hybridities: those that are spatial, physical, or corporal and those that are aesthetic, ethnic, racial, cultural, or linguistic.
Play available in Catalan, English, French, German and Spanish.
Play for 1 actor and 1 actress.

Nomads
In a series of crossing stories, Nomads fuses the traditional forms of the theatre of North Africa with the polyphonic proposals of European contemporary theatre.
In 1939, the Republican fleet reached the city of Bizerte, in the north of Tunisia. The crew were interned in a concentration camp close to the desert. One officer, obsessed with keeping his sea bag full of books, will do everything possible to escape. In 2015, some migrants from sub-Saharan Africa have become trapped at the gateway to Chott-el-Jerid on their long journey towards the Mediterranean. As they talk and recount their long adventure, we will discover their rivalries and their fears. In 2012, two young Catalans, Pol and Aina, travel to Tunisia. Aina knows that her grandfather, an officer, was imprisoned in Africa after the Civil War. What she doesn’t know is that it was in Tunisia… At the entrance to the Chott, Pol and Aina meet the actor who played the role of Luke Skywalker in the Star Wars films. Luke enters the Chott and nobody stops him: this is the place where he was happy, where the first of the films in the saga was shot. He wants to re-encounter the lost paradise of the planet Tatooine. Aina will follow him.
Play available in Catalan, German and Spanish.
The play can be performed by an indefinite number of actors and actresses. 3 men and 2 women can be a good starting point.