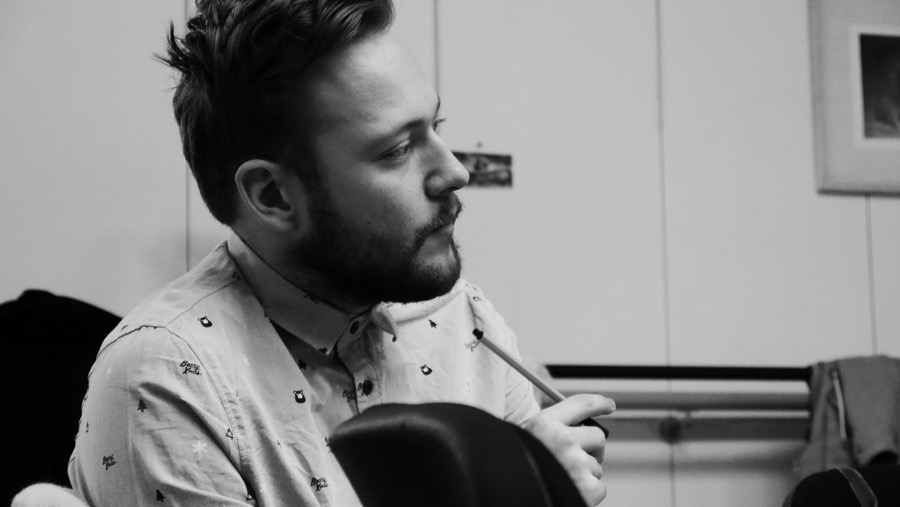 David Kostak (1991) belongs to the authors of the youngest generation, yet he has written a respectable number of plays, both original topics and author’s adaptations of classic literature. His plays mostly touch interpersonal relationship, the fate of individuals in today’s society, criticism of consumerism and other phenomena of today, he often refers to childhood memories and inner world of person. His plays are characterized by a poetic language, with a slight touch of playfulness and humor, but also pathos and tenderness.

See below all the activities involving David Kostak in the frame of Fabulamundi.

David Kostak was born in 1991 in Prague. He graduated in Theory and criticism of theatre in DAMU (Theatre Acadacemy) in Prague. Apart from his own writing he also translates from plays from english and he is dramaturg of Theatre LETÍ. He started to write his own plays during his studies but he debuted in 2013, when Theatre LETÍ performed his short play Fresh Love. The play already dealed with topics that he works with quite often in his work – man responsibility at the level of interpersonal relationships, but also his responsibility for a state of todays world. In his plays he often works with remarkable metaphor and with elements of magic realism, that are at a starting point of a plot. It can be said especially about his „space trilogy“, which contains: Taxistyx (Theatre LETÍ) about mother that runs away from her family responsibility via taxis in which time passes more slow; Over the spilled milkyway (Czech Radio, Theatre Karlovy Vary) and his adaptation of a story of the famous dog My name is Lajka that should educate the youngest audience about manipulation of totalitary regimes.

His work is quite varied when it comes to genre. Among his plays there can be found post-dramatic plays (Taxistyx, Heart belongs to jali) intimate relationship dramas (Over the spilled milkyway), plays for children (My name is Lajka, radio western for teenagers No country for young men, family musical The Chroniclers – brief history in musical) but also adaptations of classic literature (Lady with Camels, Don Quijote’s Awakening, The Chronicle of death foretold, Solaris). Despite the diversity of his plays and different audience groups David Košťák still has distinctive voice due his significant work with language.

He started to write plays on comission quite recently but he still saves some time for writing that is not meant to concrete theatre. At this moment he writes play with big cast for Švandovo Theatre in Prague Downotwn – modern myth about city that tries to get wealth from local mines so hard that it starts to fall into the ground. From his own iniciative he writes intimate relationship drama A Bird Woman from utopian world where people had forbidden birds to migrate.

When Klára was a little girl her father left for journey to space. Now he is back. She got 50 years older her father on the other hand got 5 years older. Now they face the most difficult task – to accept the fact that their roles are exchanged. The child becomes parent and the parent becomes child. And since she suffers from cancer the clock is ticking. There is not so much time left.
Poetic play about relation of juvenile father and aging daughter. The time have flown through their fingers just like a star dust.
Play is composed of realistic scenes, poetic scenes and monologues of both characters.

Play is composed of fate of three characters. Young man from China comes to Czech Republic after sound of heart of his father. The heart was transplanted ilegally. He comes to listen to his beating for a last time. Young European woman starts to realize the impact of her everyday acting. She realizes with horror that today it is impossible to be a good man. Nobody is good these days. There are only people who realize their guilt and those who don’t. Third hero is character from animated show for children – Little Mole. Panda lures him to  China because she wants to use his innocence to promote Chinese regime. Little Mole leaves to China with her and becomes withness of horrible missuse of human rights.

Postmodern collage was written in residency on concrete theme: violence. However play shows the most dangerous violence. The violence which is invisible, which is not direct. The violence that is a part of our everyday life. Play display it in absurd and grotesque scenes that force people to think about their own responsibility and the impact of their own deeds. The play as it’s main character of Chinese man doesn’t point finger at anyone but it wants to talk to peope who thinks about the state of contemporary world. That’s why the man speak with the audience in the end: „It is here. It sits with you. Somewhere among you there is chest, in which it beats. I don’t want to take it back. Please… I beg… let me sit with you… and listen. The heart of my father. It’s not happy here. But it still beats”.
Available in English.