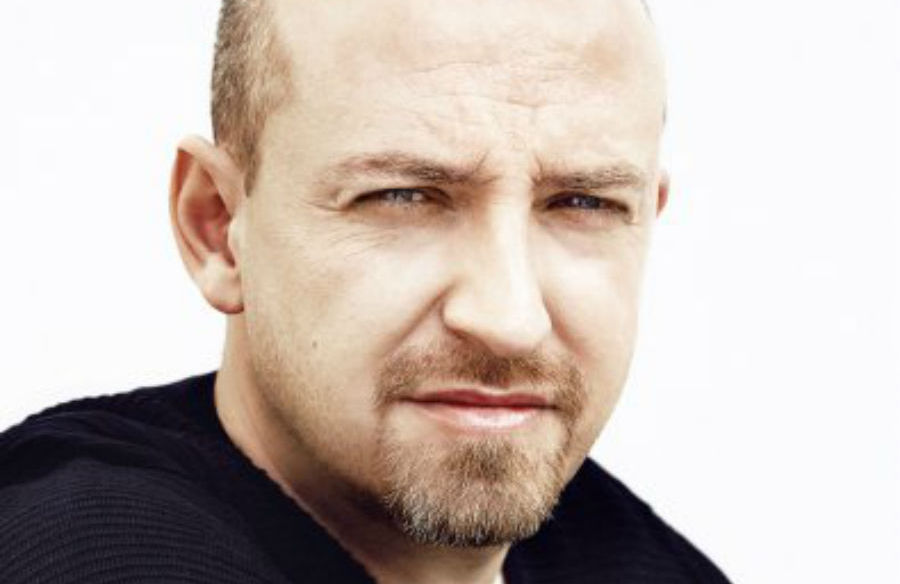 Against Progress (2008), Against Love (2009) and Against Democracy (2010) constitute a trilogy-mirror that reflects the monstrosities and sinister contradictions of the times we live in. In them, Soler presents his vision of man and the contemporary world in little Gothic pills, seven candies per play filled with sulfuric acid. A gloomy world which is a distant cousin of the Grand Guignol and episodes of The Twilight Zone; but also a heir to the words of Ionesco or Beckett, the methods of Brossa and Calders, the imagination of Buñuel or the ill will of Boadella. And at the same time, the voice of this young playwright is tremendously personal and sincere, which makes it irresistible. (From the prologue of the printed edition, by Jordi Duran.)

See below all the activities involving Esteve Soler in the frame of Fabulamundi.

In 2010 the Institució de les Lletres Catalanes and the Institut Ramon Llull considered Esteve Soler as one of the Catalan authors with the greatest international dissemination. His plays have been translated into 17 languages and have been performed in countries such as Germany, United States, England, Switzerland, Greece, Rumania, Brazil and Mexico, among others. His literary career is resumed with the Indignation trilogy (2007) – Against Progress, Against Love and Against Democracy– and the Revolution trilogy (2017) –Against Freedom, Against Equality and Against Fraternity.
A graduate in the Performing Arts from the Institut del Teatre and the Universitat de Barcelona, he exercises as teacher of dramaturgy at the Universitat de Lleida and the Sala Beckett, a centre for creation in which he has been involved for over a decade. He has also worked as dramaturg for such international companies as La Fura dels Baus, Pere Faura and Insectotròpics.
As a filmmaker, his works have participated in the official sections of prestige film events such as Clermont-Ferrand, BFI London, Málaga, Sitges and New York’s Rooftop Films, among many others.

Against Progress
Against Progress consists of seven short plays. Seven moments as distant as they are close. Seven surrealist and striking visions of a progress that does not advance, a progress that despises us, the same progress as always.
Play available in Catalan, Croatian, Czech, Danish, English, French, German, Greek, Italian, Romanian and Spanish.
Play with many characters that can be performed by 2 actors and 1 actress.

Against Freedom
Against Freedom consists of seven short plays. Seven moments as strange as they are close. Seven surrealist and categorical visions on the freedom that retains us, the freedom that enslaves us without us realising, the only freedom that is promoted by power.
Play available in Catalan, English, Greek and Spanish.
Play with many characters that can be performed by 2 actors and 1 actress.

A teacher reads a story to her class, a group of boys and girls who follow the reading in their books from their respective desks and chairs, ordered in rows.

Teacher: “Once upon a time there was a little girl with blonde hair and blue eyes who lived alone with her mother in a little town in the forest. Every day, before going to work, the mother dressed her daughter with a reddish cape. Therefore, the entire town knew the little girl by the name of Little Red Riding Hood.”

The boy in the last row, Enrique, lifts his head and speaks.

Enrique: Miss, I’ve gotten lost.
Teacher: Now I begin the second paragraph. “It was a happy and sunny day when Little Red Riding Hood’s mother gave her daughter a very special task. Since she had too much work and couldn’t go, she asked the girl to bring a large jar of honey and some cookies to her sick granny, who lived on the other side of the forest. But before the girl left, her mother warned her that there was a very dangerous wolf in the forest and that if she should meet it she should run away.”

Enrique: Miss, I’ve gotten lost again.
Teacher: If you get lost, it is not necessary for you to read along, listen to me and that’s enough. “When she started along the path, Little Red Riding Hood saw the shadow of a little boy who followed her, but since it wasn’t the wolf, she didn’t pay him any attention and continued singing and skipping while she approached the house of her grandmother, who she missed very much because she hadn’t seen her in many days.”

The lighting has made the last row of desks and chairs disappear, and with them, Enrique.

One of the students, seated just in front of Enrique, interrupts the tale once again.

Girl: Miss, I think that Enrique has gotten lost.

Teacher answers her without lifting her eyes from the book.

Teacher: I already told him, Marga, that he should listen like the rest. Don’t interrupt me, please. “At that moment, the wolf approached Little Red Riding Hood stealthily, but at the last moment the wolf discovered a boy who was lost in the woods. His name was Enrique.”

Teacher lifts her head from the book, surprised, and searches for Enrique in the classroom.

Teacher: Where is Enrique?

No one in the class responds. She continues reading the story, with interest.

Teacher: “Enrique was a shy boy who didn’t feel loved, neither by his parents, nor by his teacher, nor by anyone in the world. He was the typical child who no one would miss if a black wolf swallowed him up after chewing his tender flesh for a while.”

Teacher closes the book and looks at the cover. Then she searches the entire classroom for Enrique. Frightened, she turns her back to the students and continues reading the story, in a soft voice.

Teacher: “Slowly, step by step, the wolf approached Enrique, who was cornered against a tree. The poor boy cried in fright, he already knew perfectly well what his fate would be: the sharp teeth of the savage killer were approaching. The wolf told Enrique to shout and beg for help from the woodcarver of the forest, because that excited his homicidal instincts even more.”

The illumination makes the rest of the students progressively disappear.

Teacher: “Meanwhile, Little Red Riding Hood went to ask her grandmother for help, but discovered that she’d been dead from her illness for months, lying on the floor of her little house and no one had realized. The wolf couldn’t resist any longer and began to devour, bite by bite, Enrique, who saw how the forest turned a reddish color, while he begged the woodcutter for help.”

The light that illuminates the Teacher turns red.

Teacher: “Sadly, the woodcutter of the forest had just been fired and was in his house, embarrassed, not knowing what to do, beating up his son.”

Teacher discovers that she is alone.

Teacher: “Then, Little Red Riding Hood felt a strange interest in the butchery the wolf was making, she climbed up a tree and, as she ate the cookies and the large jar of honey, she stayed to watch how the killer crunched Enrique’s bones in its enormous jaw.”

The howls of various wolves are heard..

Teacher: Is anyone there?

Teacher begins to shout, while the wolves devour her in the darkness.