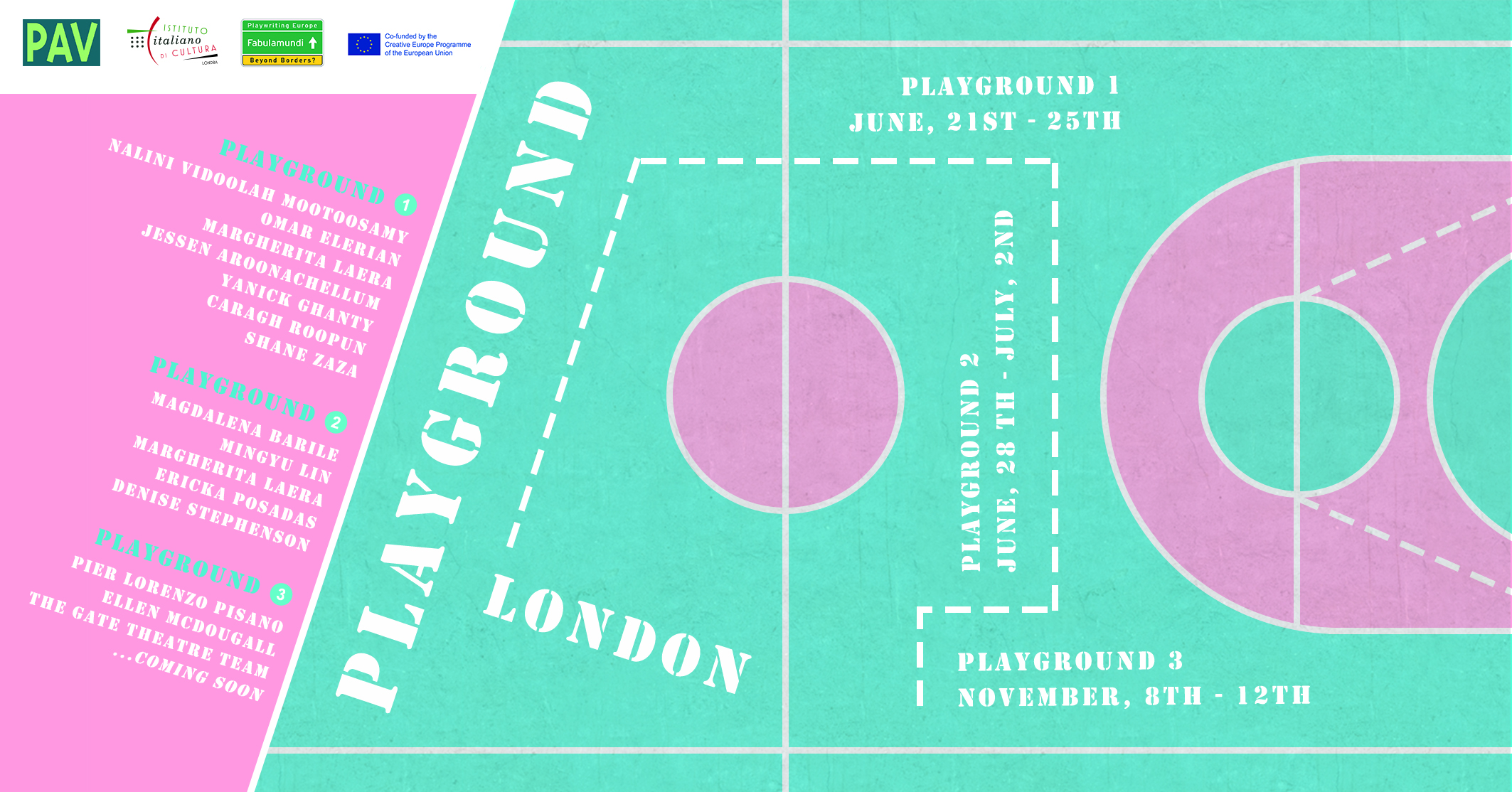 Crossing the writings, putting them on the field, catching the breath and rhythm of the lines when the voice of a performer shapes a body for them.
With Fabulamundi PLAYGROUND, PAV puts itself once again at the service of its authors, designing three Research & Development workshops for contemporary dramaturgy in precious collaboration with the Italian Cultural Institute in London.
From June to November, three online sessions will see three Italian playwrights, Nalini Vidoolah Mootoosamy, Magdalena Barile and Pier Lorenzo Pisano, working in synergy with two directors with an international background, Omar Elerian and Mingyu Lin and their respective artistic teams to experiment with mechanisms of writing and shared investigation, making language a playground, tuning in with the new formats and languages ​​of the English theatrical panorama.
With the supervision of Margherita Laera, also as translator of two of the selected texts, the three PLAYGROUND will be testing the plays thanks to the precious involvement of three casts of actors and actresses from the English scene. They will interrogate the scripts and characters as they appear on the page, and discuss the wider issues of translation and adaptation from the Italian context into the British one.
In the same way, active dialogue with the translators, in addition to bringing further feedback, will also contribute to the promotion of texts in the English production industry.

PLAYGROUND #1
We begin on Monday 21 June until Friday 25 with the first PLAYGROUND on the text The Foreigner’s Smile (working title) by the Italian author of Mauritian origins Nalini Vidoolah Mootoosamy which will be tested by the Italian-Palestinian director Omar Elerian and by a cast of four English performers.

PLAYGROUND #2
From June 28 to July 2, the director Mingyu Lin and two English actresses will be confronting the text by Magdalena Barile, Gentleman Anne.

To close the cycle of Research & Development workshops, from November 8 to 12, Omar Elerian with Atri Banerjee and a cast of British actors will work on the text Carbon by Pier Lorenzo Pisano.

The last day of each of the three sessions will be dedicated to a public opening, inviting directors, artists and professionals to attend the readings of the texts and take part in a session of Q&A shared with all the people involved in the process.

Thanks to its experience proven in almost a decade of activity and with its extensive network of partner theaters, authors and texts of contemporary dramaturgy representing 18 European countries, Fabulamundi Playwriting Europe creates with PLAYGROUND a showcase of languages and diversified formats, once again placing at the centre of its action theatrical writing and the creative process that continually leads it to the stage.