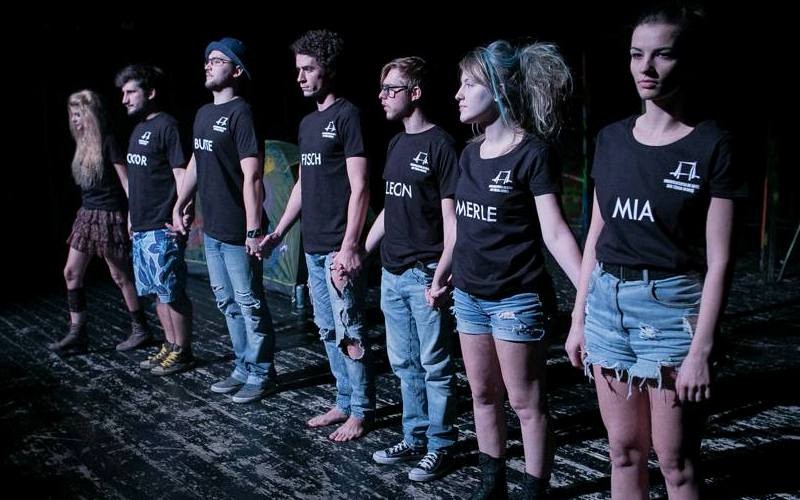 ”(…) I felt I could fly, I can do and achieve anything, I am invincible, but also pain, frustration, fear, helplessness and… despair.”

Water, lots of water and not only because I play Fisch, but because the rehearsals went as a power juicer. When they finished, I was sad because they were so intense, full of life and something that made you stay on stage and look into your past for memories and emotions, events which have not been given importance.

Many of my character’s personal details – if not too many – were the same as mine. Shocking for a moment, because I realized now, how I have been back then. Even if I felt from the start that the character is mine, I was far from it. The first two rehearsals after the readings were cruel to me, I knew what I had to do, but my body was doing something totally different. Of course, I am not 19 anymore. After, I decided I am 19 again and began to remember how it was and also observe people around me who have similar or the same data as Fisch. After that, I began reliving or rather living the period of 19-20 years of my character.

I entered so much into the story that when I went home from rehearsals I called my colleagues with the names of their characters and talked to them in the language of Jan Friedrich’s play. This is still happening now.

I no longer felt that we are rehearsing, but a great joy, enthusiasm, and appetite for the teenage live everywhere: on stage, in classes, at home, on the street, in the morning or evening, etc. By the end of rehearsals, I failed to teach my text as I should, because I knew it was in me – and I was right. On stage, Fisch had all the words in him and I am not talking only about the text. Also on stage I felt I could fly, I can do and achieve anything, I am invincible, but also pain, frustration, fear, helplessness and… despair.

None of my colleagues left me indifferent, I felt that I hate and I love everyone including the director. For me, he is the greatest friend who responded to all my questions and concerns. Lucky for me, he will be there at our future rehearsals and performances, so that I can share with him my new thoughts and emotions. If things had been different, I would have felt it as a big loss.

This project is one of the best – if not the most beautiful performance that I have worked in so far.