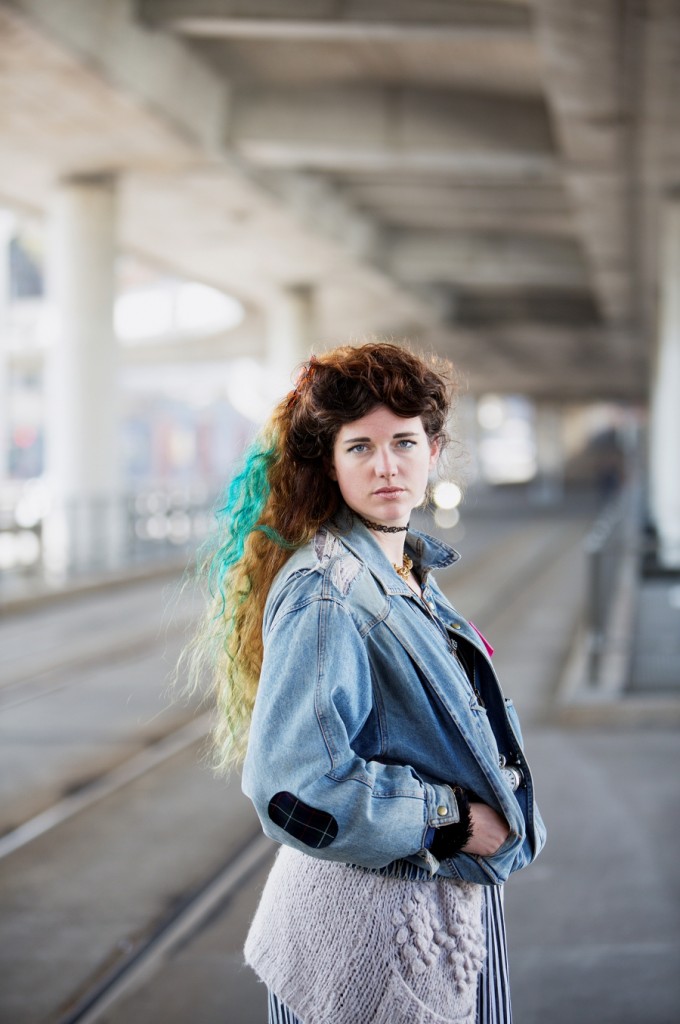 Theatre is the ideal place to ask questions, to be able to ask questions, to allow them a decent amount of space to reverberate in the heads of the audience, in the bellies of the performers; enough air, space, time to scratch across the retinae of everyone involved, to arrive in the seats of the audience. Theatre is a place where everyone who goes there is the same, where they share a collective experience, this: Being together in the dark alone. Theatre has a responsibility as a place where questions can sprout; where ambiguities, contradictions, yes, pathologies can live and open their mouths, not a place of mutual agreement, or of direct answers, or of virtual pseudo-simultaneity. Because of these things, among others, I have great affection for this place, I believe in it, and that is probably about half the battle won to make me want to write for it.

Fabulamundi involved Katja Brunner in activities in Rome in the first edition of the project.

Katja Brunner, born 1991 in Zurich, studied literary writing at the Hochschule der Künste in Biel and dramatic writing at the Universität der Künste Berlin. In 2012 she took part in the Vienna Burgtheater’s Werkstatttagen and was subsequently invited to participate in the Heidelberg Stückemarkt. In 2013 she won the Mülheim Dramatists’ Prize with “von den beinen zu kurz” and was voted Best Young Author by Theater heute magazine’s critics’ survey. In the season 2014/15, she was the resident author at the Lucerne Theatre, where she wrote “geister sind auch nur menschen”, performed in 2017 at Schauspiel Leipzig, directed by Claudia Bauer. In 2016 she was awarded a sabbatical year by the city of Zurich for her draft of a novel. Her latest play “Die Hand ist ein einsamer Jäger” is due to be premiered at the Munich Kammerspiele in May 2018. Her texts have been translated into various languages and her plays performed on four continents.

God just doesn’t feel like sewing. Otherwise he would have long since put something on them, those NUDISTS.

When does life begin and why? This text by Katja Brunner takes us on a hellish trip into the uterus, the “grisly place” where the horrors and lust of life start, descends into the basement dungeon of him down there (any similarities with existing persons are obvious) and, against all prevailing logic of interpretation, overwrites any other sacrifices traditionally made by the female sex. Through language, by speaking, by raising their voices, those who were condemned to silence – led by the battered hermaphrodite Hermi – regain their right to exist. This is open-heart surgery on a society with such structural force, such a brutal dictate of normalization that perverse consequences are accepted: hiding others, locking them away, making them invisible. Yet this powerfully eloquent text composite is no grouchy indictment but a frivolous, ironic sparring; subversive mental gymnastics for those among us who can’t be mourned, who don’t exist. And in their place, it marginalizes the mainstream of parochial society.

The homes of the elderly, sick and untouched who have been robbed of their homelands are the setting for this new text by Katja Brunner. It involves, the author explains in her foreword, SPEECH WITH NO FUTURE which is therefore “freer than a lot of other speech”. This talk does not take place politely at the bedside but rummages around in the excrement-, scab-, tube- and catheter-adorned beds of those condemned to lie prostrate. Screened from a world they actively surrendered themselves to, they wonder at the broken pieces of their respectable lives: Past experiences are juxtaposed against irrevocably missed opportunities, dreams mutate into nightmares. One resident perceives her stroke-damaged body as a forgotten glove; another is threatened with eviction for sexual assault on a female member of staff. Haematoma caused by contact with the care staff is generally agreed to be “a sign of affection”. The old folks no longer mince the words coming out of their parched mouths. They spill them out, in stream after stream. In the end, cancer gets the upper hand. Spellbound, they listen to the tumors growing inside until their jaws drop. “geister sind auch nur menschen” is a text for and by the doomed, in homes where their every need is seen to, so that they do not hinder their capitalist-trained, busy offspring: a powerful drama that puts the dying back at the centre of a society that professionally marginalizes them.

DIE HÖLLE IST AUCH NUR EINE SAUNA
When does life begin and why? Katja Brunner encourages you to join her in a hellish trip into the uterus as a “terrifying place”. The goings on in the innards of Elisabeth Fritzl and those of other female victims are re-scripted to thwart every accepted logic of interpretation. Figures like the speechless Hermi, a battered hermaphrodite, fight for the right to exist. The work is a close look at the society which, by virtue of its structural might and relentless standardisation, locks up others and makes them non-existent. The powerful text is a frivolous and ironical survival course for all the “non-existent” in our midst. die hölle ist auch nur eine sauna [hell’s just another sauna] by Katja Brunner

The following apply to this text and all those who are referred to therein
1.) THE WORLD AS DOUGH IN THE MOUTHS OF THE SPEAKERS
2.) SPEAKING IS THE LAST BLOUSE / THE LAST SHIRT THAT THEY WEAR
Those that speak are:
all those below
The Hermaphrodite
The Amazon
The Girl
and other universal-villagers (always there, never away, never tired and never sated.)

Preliminary remarks which may be considered:
(THEY ARE NOT WEIGHED BY GRIEF, GRIEF NEVER DID ANY MORE TO THEM THAN CHEWED FINGERNAILS OR JUST ONE OR TWO HOURS OF SLEEPLESS PER NIGHT OR DAY.)
WHAT IS BELOW IS THE DUNGEON OF THE HOUSE. THAT IS PRETTY CONVENIENT BECAUSE THE DUNGEON IS LOCATED WHERE THE FATHER LIVES, THAT IS WHAT IT MEANS.
THE FATHER LIVES WITH WIFE NUMBER 1 AND WITH CHILDREN NUMBERS 2 TO 4 IN THIS HOUSE (ABOVE GROUND) WHILE UNDERGROUND IS WHERE SHE LIVES WITH CHILDREN NUMBERED 1 TO 12. (OF NUMBERS 1 TO 12 EXIST ONLY 2, 3, 5, 8 AND 11. THE OTHERS EVAPORATED OR ELSE WERE EATEN OR RELEASED FOR ADOPTION.)
OUTSIDE THE HOUSE ARE THE REMAINING AKA THE CURIOUS ONLOOKERS.
OUTSIDE THE HOUSE IS THE UNIVERSAL-VILLAGE.
THE UNIVERSAL VILLAGE is located either in a) Germany; b) Switzerland; c) Austria. The universal-village is a medium-sized town with all facilities which a medium-sized town usually offers: several schools, hospitals, cemeteries, a pedestrian strip (or two), bathing houses, places of worship for various religions, squatters, XY, the usual.
So the universal-village is so universal that it could exist in any German-speaking area. And the people who inhabit the universal-village are the universal-villagers.

ON HOW THE UNIVERSAL VILLAGERS LEAST FATHOM HOW
– The snake, what did it say
– What do you mean, said the snake
– Well, what the snake told Eve
– In the sweat of your face you are a filthy disobedience
– No
– Eat, take a good bite
– Small apple, smaller baby apple, such small baby apples and such a big man, they should do no harm, it’s surely more ecstatic than everything, that of Adam
– HE eats them all the time, HE has them for breakfast
– What good did it do to the snake that Eve bit into it
– The snake, bonded to the creator in a dubious nexus
– The snake was fed up having to see these nudists day after day
– So it tried the trick, mind, it didn’t try it just with the trees bearing fruit, it also muttered and cursed, made photos and tacked them on the garden wall in order to convince them that their genitals looked disgusting
– Nothing helped
– No, nothing eased the burdens of the snake, none of its efforts were rewarded, none of its prayers heard
– It led Adam to the river so he could see his reflection on the water, so he could see himself from an outside perspective and look:
– He should be ashamed of his genitals, ashamed of his stature, the deformed apes, so the snake thought
– And what he did
– Oh, what he did
– He didn’t see himself at all, jumped right into the water, that’s how drawn he was to the image
– A young pup
– The snake thought to itself: and I didn’t as much as throw a stick –
– All efforts for nothing
– Until one day when it thought of the TREE, OH YES, THE TREE, the fruit on the tree, OH YES, it’s not called the forbidden fruit for anything, thought the snake
– Or perhaps it tried to explain everything, understand, how effortless, how casual, for example
– God just couldn’t care to sew. Otherwise he’d have dressed them up, these NUDISTS. Thought the snake.
– The snake also thought often: what did God think when he created women
– The ends justify the means
– If there was at all a god, he said at this moment
– ta, bye, ciao
– Servus
– God was never an Austrian.