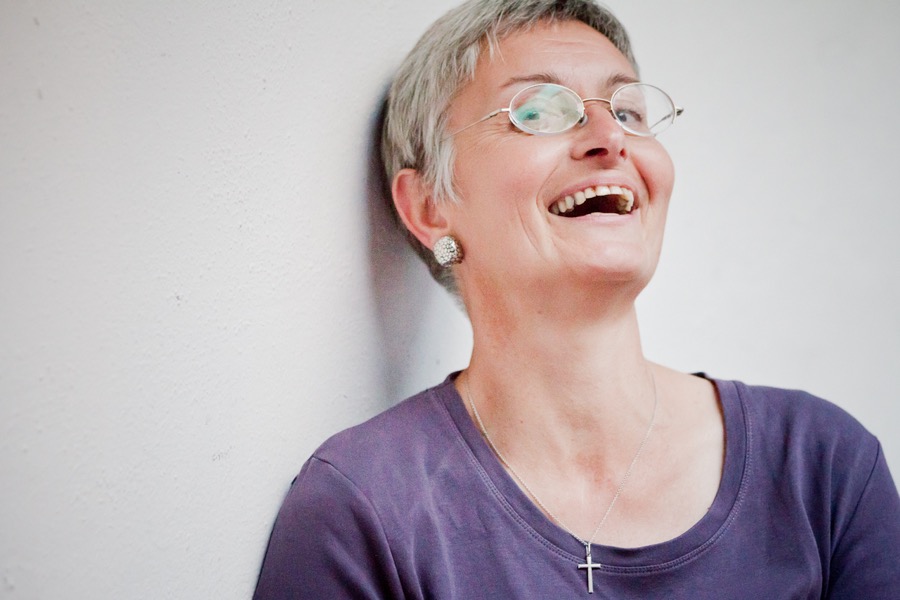 Lenka Lagronová (1963) is especially interested in women’s themes. Most of her plays deal with a woman’s fate, unresolved family relationships, family secrets, and fatal mistakes, feeling of guilt and the inability to understand the world around and become a part of it. In the poetic language of the plays, there intermingles stylized language with symbolism, often with religious connotations.

Lenka Lagronová was born in Brno in 1963. Graduated from dramaturgy at the Theatre Faculty of the Academy of Performing Arts in Prague under supervision of Prof. Jaroslav Vostrý. She wrote several plays whilst still a student that were later staged in the DISK Theatre (e.g., Nouzov, U stolu). As a dramaturge, she has worked only with the director Petr Lébl at the Theatre on the Balustrades. She devotes herself to writing plays for the theatre and for radio.
She has written more than 25 plays that were staged, for example, in the Prague National Theatre, the Prague Comedy Theatre, Prague’s Vinohrady Theatre, the Činoherní Studio in Ústí nad Labem, the Uherské Hradiště Theatre, the Pardubice East Bohemian Theatre, the Viola Theatre in Prague, the National Theatre in Brno, the Andrej Bagara Theatre in Nitra, the JGT Zvolen Theatre, the Croatian National Theatre in Zagreb, and her play From dust of stars was produced as a staged reading at the Teatro Argentina in Rome. Repeatedly, her works were directed by Jan Nebeský, Štěpán Pácl and Radovan Lipus. Several times she was the finalist of the dramatic Alfréd Radok competition. In 1998, her play, Terezka, won the Alfred Radok Award, and in 2010 her play From dust of stars won the second place in the Drama Competition.
She also writes radio plays and fairy tales. Her radio play Get Up was awarded the main prize at the Grad Prix Bohemia radio play showcase.

Shorter play as one act takes place in old, neglected, cemetery. Věrka escaped here, because she “has already broken” everything and she has pills with her, that she is willing to swallow. She meets Mirka, that comes here to cut the grass. Věrka drugged with pills first gets freak out by Mirka, who is all in black with scythe, and she falls down and break her knee by the edge of grave (“It is sharp… those graves here are sharp”). Mirka invites her to her place to clean her wound. She lives in old morgue, that was “given” to her and that is now her poor abode. She makes a tea for Věrka.

During quite common conversation both of women get closer and they reveal their inner world. Both are lonely outcasts. Věrka suffers from essential feeling of guilt and that’s why she punishes herself. Mirka often doesn’t eat for ages, because she hopes to feel regret. However both are bravely trying to carry their destiny (“One just cannot think about the fact that others live their life differently. To live is what matters.”). Both have something what give them strength: Věrka has tape recording of polish religious songs. Mirka has wardrobe full of homemade night gowns. As time goes by they decide to die side by side, they put on Mirka’s gowns and they enter deep grave that is decorated with a statue of Virgin Mary that was thrown to junk by someone. They lay down, listen to songs from recording and sing together…

The play is characterized with strange fragility and simplicity. Dialogue is very brief with simple sentences that have their own specific poetics with a scent of dark humour. Repeating motives compose strange mosaic of two women fates that are sad but also full of hope. The play is great opportunity for two actresses no matter the age.
Play is available in English.

In the wait state, or stagnation, are the heroines of the play “From Dust of Stars”.
Three daughters live with their mother in a desolated house (this situation is the traditional of this author). Táňa and Dáša cast their mind back to their former love – a man they had a very intensive relationship with, yet he never became a love and although (or therefore) they are not able to come to terms with his death. The youngest and slightly retarded Kája “transmits” signals to extraterrestrials with her torch and a transistor radio – this is a “legacy” of their father who was talking about conquest of space. The Mother is the only “rational” one, yet we feel loneliness and desire for love in her tough pragmatism. The final “space theatre”, an apparition of many space phenomena at the same time, can offer a feeling of a happy ending and the answer for sisters’ call, however, everything remains open.
The play was on the second place in the competition for the best play in Czech and Slovak DRÁMA 2010.
Play is available in English.