For me, playwriting is like my private chamber, a place where I can write in solitude and produce my own inventions, seek my own sensitivity and the rhythm of things just as I wish. If I believe that the world is fragmentary, because at that moment I feel it thus, I write fragmentarily; if what I want is to get very close to the characters, I shut them up in a room, and if in contrast I want to make them fly, I put them into impossible or broken or merely insinuated spaces. I like little stories because that way I can explain better what I feel or because that is how I started writing, in small theatres, at workshops where one wrote for the pleasure of writing, to search, to test. Writing is the only thing that makes the hands of the clock whizz round and the hours pass like water.

See below all the activities involving Mercè Sarrias in the frame of Fabulamundi.

Barcelona, 1966.
She is a graduate in Information Sciences from the Autonomous University of Barcelona. Her most recent plays for theatre are L’any que ve serà millor, collective work with texts by Marta Buchaca, Carol López and Victoria Szpunberg (La Villarroel, 2011); Quebec-Barcelona, a project with the Théâtre de la Sortie de Secours of Quebec (premiere in 2012); and the divertissement Santi’s RIP (Fira de Tàrrega, 2011). Previously, and within the programme T6 of the Teatre Nacional de Catalunya, she has presented Informe per a un policia volador (Sala Muntaner, 2009) and In defense of the Albino Mosquitoes (TNC, 2008). This latter work travelled afterwards to the Theâtre Le Periscope (Quebec) and the Théâtre de la Vieille 17 (Otawa). Furthermore, she is the author of the short text Una lluita molt personal (2004); La dona i el detectiu (2000), presented at the Sala Beckett; An Absent Look, written in 1997 with a grant from the Catalan Government’s Drama Centre and presented as a dramatised reading in France and the United Kingdom; Àfrica 30, Ignasi Iglésias Prize, runner-up for the Maria Teresa de León Prize for Women Dramatists in 1996 and premiered at the Sala Beckett in 1998 and Al Tren (1995). She regularly works as a screenwriter for television.

Informe per a un policia volador
Amèlia, a distinguished forensic scientist, is found dead at her home with a blow to the head. The police decide it was an accident, but her daughter Anna, convinced it was murder, begins an investigation into her mother’s past and the people closest to her. A bingo hall, an anxious neighbour and a series of bars and refreshment stalls across the city will be obligatory stopping places along this journey through which Anna will find herself and discover the reason for the black hole that has marked her life.

In defense of the Albino Mosquitoes
It is not easy being forty, having an adolescent daughter, an ex-husband who gives classes in ethics, a semi-political post in the Environment Department and fighting against the police over a matter of driveways and parking. Marta, the main character, has fallen out with the world and only a series of surrealist events will make her reconcile with it, recover her self-esteem, rediscover friendship, and find love and believe that she is not as disastrous a mother as she thought. Along the way, mosquitoes of relative ecological value will vanish.

An Absent Look
A second-hand bookseller who doesn’t sell books, a young watchmaker who doesn’t mend watches and a girl who passes by are the main characters in An Absent Look. All three feel uncomfortable in a world they do not understand, make impossible plans, exchange looks, fall in love and quarrel, talk about literature and the weather. An Absent Look is an entertaining and poetic play, a comedy of small things.

When you write you have the characters on your mind. One perhaps has the face of an actor you know, or a friend’s body or the way your neighbour use to walk. You have on your mind a person, maybe a fusion of people, maybe someone you really know. And then an actor does the […] 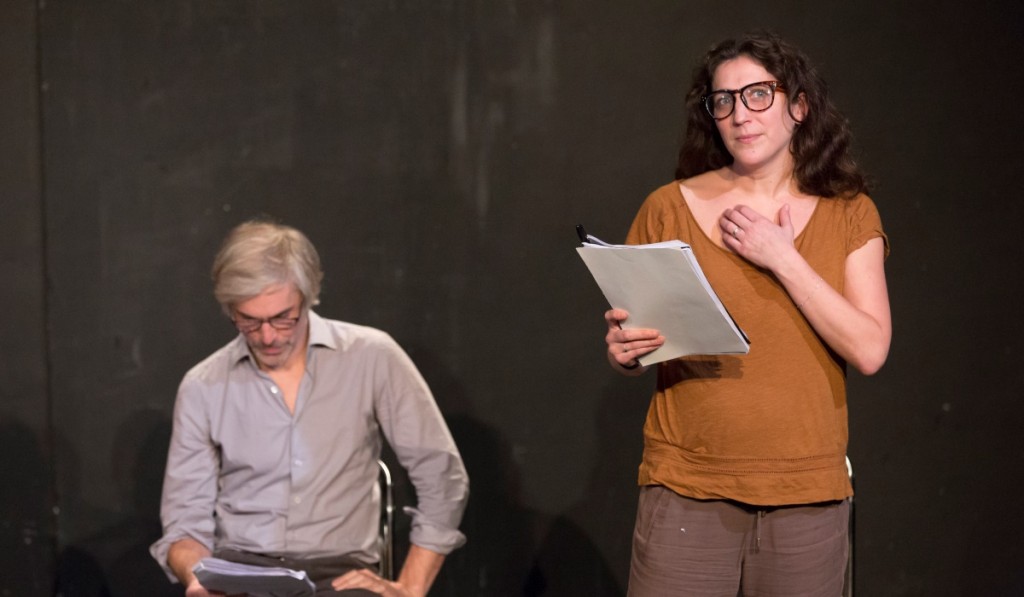 Mercè Sarrias has been invited at Théâtre Ouvert with her text "In defense of the Albino Mosquitoes" on November 2015.