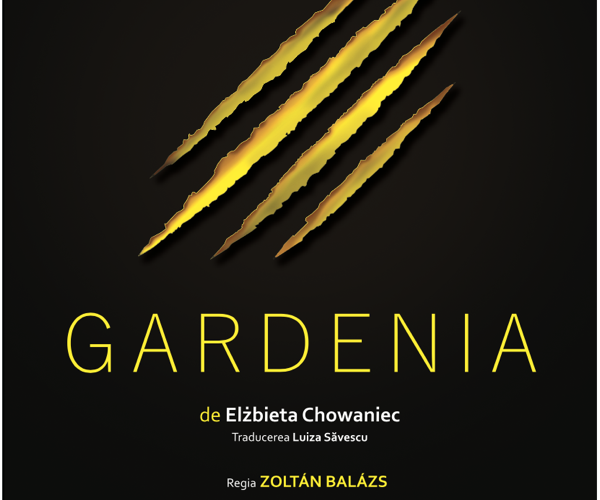 On May 31 Gardenia by the Polish author Elzbieta Chowaniec debuted at Teatrul Odeon (Bucharest) and went on stage during the following month.

Here we publish the translation of a review of the show by the Romanian Acta est fabula online magazine (here you can find the original in Romanian):

Those prodigal mothers and their daughters

Is it something genetic? Or is about the mentality that, over the course of a century, does not change fundamentally? A certain kind of implacable, a touch of destiny, beyond our power to manage our own life? Or the irresistible desire to be part of the future of our children? To be – so – contemporary to our posterity?

Four destinies marked by Mother’s personality. Four women, four survivors, and four victims in search of escape, becoming a trauma source for the next generation. The repeated burden of the struggle to break out of the failure paradigm. Alcohol, lack of affection, routine, abandonment, selfishness, wandering and a painful and impossible sensation of irretrievable. A world that does not assume martyrdom all the way, and which – perhaps that’s why – cannot be saved.

Elzbieta Chowaniec’s text is concise, sharp, rough, like an indictment or – more accurately – like a probatorium that – paradoxically – is not seeking to establish the truth and the conviction of perpetrators, but draws us into a seductive interrogatory with ourselves. In a hostile, chaotic universe lacking forgiveness, compassion, and in which illusions are lost quickly and tragically, life continues to give life. A tremendous, powerful text, valuable both in spiritual and emotional terms.

What Hungarian director Zoltán Balázs managed together with four actresses of magnetic personality and undeniable creative scale – Antoaneta Zaharia, Paula Niculiţă, Simona Popescu Madalina Ciotea – can be assimilated to an intensive theatre course. Seeing this show it is clear to us, it is impeccably represented what means and implies a director conception (to know WHAT you want with a text, WHERE you’re going and HOW to make your way to the safest and most spectacular way to a percussive message). The director is a master of the profession’s means, he has the ability to find the formula, the concept, the structure on which he builds with a surgical precision, a solid communication bridge with the audience.

The format of the opera arias is excellently covered by the director and the actresses. The whole staging has a special stylistic rigor in construction, size, rarely good taste (congratulations for Constantin Ciubotaru – stage design and Andrada Chiriac – costumes!). Attention to phrasing, rhythm, tone, pauses, gesture – a symphony impeccably orchestrated, conducted and performed, a thrilling assumption of the score, the actresses managing a magnetic transfiguration (unforgettable brightness of their eyes – captive innocence in the prison of a body under the terror of the biological clock).

At the end of the season, we received this huge gift. Gardenia is a fascinating, thrilling and revealing expedition in the history of a family seen from the perspective of the prodigal mothers and their daughters waiting patiently for them. A miraculous show that speaks with restrained rage about love, maternity, and how terribly lonely we find (even) on the (already) beaten roads of our lives. “