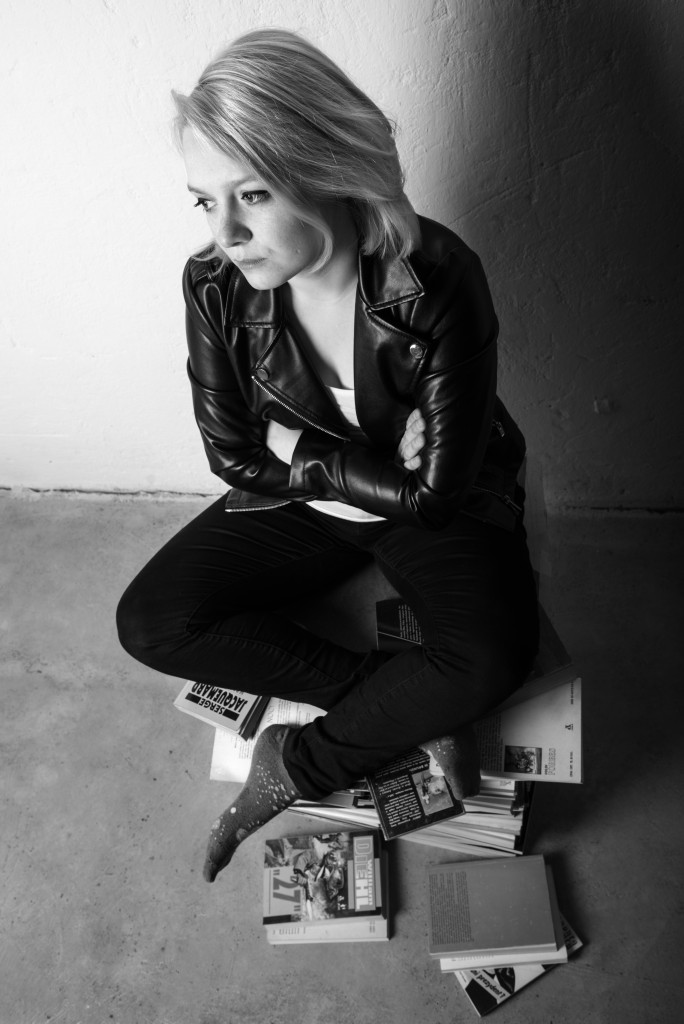 I have no idea why do I write. I’ve asked myself this question over and over again, and yet – I can’t seem to find a satisfying answer. However, what I do know is why I write for the theatre. I deeply believe that theatre is one of the last remaining forms of genuine dialogue between human beings.
I write stories based on improbable events. More often than not the bases of my themes are events which actually happened in real life, yet they are very often hard to believe. Having said that, I do not necessarily aim to stick to the facts. I’m not interested in recreating real – life situations. In each play I write, my goal is  to establish a dialogue and to create a unique theatrical form and a new language, suitable for the problems I want to discuss.

Sandra Szwarc was born in 1989 and is a graduate of the Academy of Music in Gdańsk (piano), of the Theatre Studies Department at the University of Gdańsk, as well as the South Baltic Academy of Independent Theatre. She is a two-time finalist of the Gdyńska Nagroda Dramaturgiczna (Gdynia Dramaturgical Award) for her play Von Bingen. Historia prawdziwa (Von Bingen. A True Story) (2015) as well as Supernova Live (2016), which was honored with an Alternative Dramaturgy Award. She is a recipient of the 2016 Talanton award for her dramaturgical debut at the Polish Radio Theatre. Von Bingen. A True Story inspired a radio play for the Polish Radio Theatre (dir. W. Modestowicz) and won the Grand Prix at the Two Theatre’s Festival, 2016. The radio play also qualified as a finalist at the XX Jubilee Festival Prix Marulić in Croatia. Her newest play, Doppelganger, was the winner of the II Dramaturgical Competition – Strefy Kontaktu – in Wrocław, 2017.

Fashion Victim
Mirek is a middle-aged man who leads a rather lackluster life filled mostly with television noise. What bothers Mirek most is the fact that his wife no longer seems to desire him, a fact he attributes to his less than attractive look, or rather his fatness. Despite his obvious obesity, Mirek is a man who likes to take care of himself. He is a bit of a clothes horse – something he got from his grandmother, a seamstress, who he often talks about. Mirek suffers from nightmares exacerbated by his daily despair and feeling sorry for himself. After another sleepless night, in which he is tormented by his alter ego, Mirek decides to do something about it: he sets off to the mall, treating the excursion as nothing less than a spiritual journey. In the temple of consumption, surrounded by sales, encouraged by a pushy salesclerk and a choir of voices undoubtedly the result of his sleep deprivation, he finds an ideal shirt, an article of clothing that makes him feel confident and manly again. His contentment quickly fades, however, as he reads the tag on his newly purchased item: “Forced to work exhausting hours. Lanfen, 11yo.” Mirek takes this as a sign and becomes obsessed with finding Lanfen, a girl from an unknown Asian country. To his and his wife’s great surprise, Lanfen shows up at his house that very evening, demanding justice. Reality begins to weave into dreams while Mirek begins a journey through multiple dimensions in order to fulfill Lanfen’s desperate plea.

Von Bingen. A True Story (Von Bingen. Historia Prawdziwa)
Von Bingen. A True Story is an attempt at reconstructing the story of the composer nun from the Middle Ages. What does history say about Hildegard? She was born into a family of lower nobility. As the tenth child of Hildebert and Mechtild, at the age of seven she was offered up as an oblate to the Church, and placed in the care of a prioress named Jutta. Isolated from the world for almost forty years, this nun, composer, visionary and religious reformer, was beset by a cult of holiness already during her lifetime. In the play, Hildegard’s story is recounted by two modern-day chroniclers, who reflect on a stream of incidents and, step by step, recreate loopholes in her official hagiography. The two dissidents, ironically and with detachment, unmask illusory holiness and pop the mystical balloon that floats above the life of the titular heroine.They point to her sex and sensuality as the defining factors of her identity. Though Hildegard is closed in behind thick walls, she experiences life with great intensity, through, among other things, music. The nun listens to the hidden world beyond the walls and exalts the Lord in song throughout her days. Her polar opposite is Jutta, an anchoress, who of her own volition shut herself into the hermitage years ago. Jutta’s moralizing approach to spirituality lies in stark contrast with Hildegard’s world of mystical rapture, which Jutta does not understand. What is more, Jutta envies Hildegard’s contact with God. Hildegard discovers that holiness is a trap. Concocted as a figure of mass fancy, she slowly loses her Self.