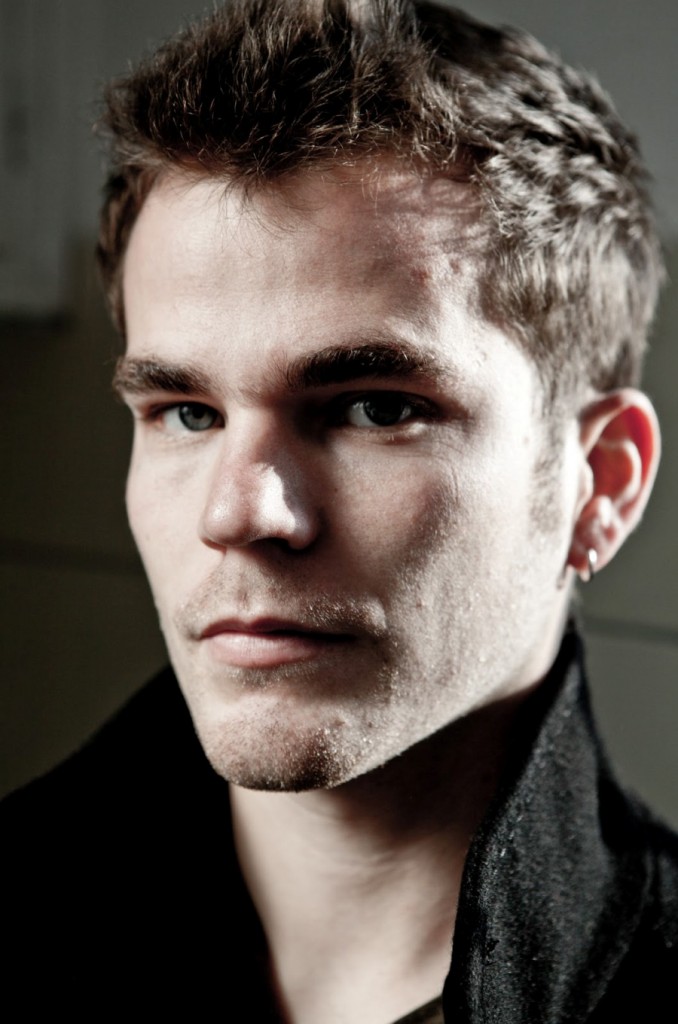 The territory is a fundamental theme for me – I even made it the title of a trilogy. The ˝line˝ motif is recurrent in my work in that it can form a link to or, on the contrary, follow on from a territory, being intimate, geographical, political, social. Also, the Fabulamundi project and its title ˝Beyond Borders˝ offers me a fabulous basis for the experiment to extend my lines of enquiry while at the same time contrasting them with other countries, other populations, other languages. Within this context, I would like to explore more deeply the relationship centre/marginal (suburbs/city centre, conurbation/rurality, institutional networks/alternative networks…).
It is also an opportunity, at a time when there is hesitation between openness and restriction, to ponder what this European ‘territory’ is about; its identity or lack thereof, its history or want of it, its ebb and flow.

Baptiste Amann was born in Avignon in 1986. From 2004 to 2007 he attended actor’s training course at ERAC (Cannes Regional Acting School).
He has been Associate Author with The Comédie de Reims since 2015.
In 2010, with Solal Bouloudnine, Victor Lenoble and Olivier Veillon, he co-founded “The Tool”, a production platform which collates the personal works of each.
He is an active member of the IRMAR artistic collective (Institut of Research Leading to Nothing).
In 2013, he wrote Des Territoires (Nous sifflerons la Marseillaise…) first part of the Des Territoires trilogy which won a grant from Centre National du Théâtre.
In November 2014, a first reading was presented at Focus in Théâtre Ouvert, FTO#1 and, in December, this play was recorded in public and broadcast on France Culture.
In 2015, he wrote Les Fondamentaux, at the request of the theatre director Rémy Barché, for the end-of studies performance of the Ecole de la Comédie of Reims’ students. The performance was staged again in November during the Focus at Théâtre Ouvert (FTO#2) and then at The Comédie of Reims.
Commissioned by Le Théâtre de la Colline, he wrote “DETER”, a short version aimed at high schools in November in Paris and directed by Rémy Barché.
In November, Des Territoires (Nous sifflerons la Marseillaise…) was published in Tapuscrit.In January of 2016, he staged Les Territoires (Nous sifflerons la Marseillaise…) at The Globe Theatre in Bordeaux, Théâtre Ouvert and at La Comédie of Reims. The performance toured at the Merlan, the National Theatre of Marseille, and the National Theatre of Bordeaux in Aquitaine, and at the Centquatre in Paris.
In May, his work La Truite was staged by Rémy Barché, at Théâtre Ouvert during the Focus (FTO≠3). The production was created at the Comédie of Reims in March 2017 and will be performed again at Théâtre Ouvert in march of 2018.
In 2017, for his play Des Territoires (Nous sifflerons la Marseillaise…) he received the Bernard-Marie Koltès prize initiated by the National Theatre of Strasbourg awarded by high school students, and the Production’s grant from The Centre National du Théâtre (ARTCENA) for the second part of his trilogy, Les Territoires (…D’une prison l’autre…).
In May, he directed the first staging of that work at Théâtre Ouvert under the aegis of EPAT (Ecole Pratique des Auteurs de Théâtre). The production was staged in September of 2017 at the Merlan, during the Actoral Festival, and then in Paris in November at the Théâtre de la Bastille, during the Autumn Festival.
Starting in 2018, he will be an associate artist at the Merlan, National Theatre of Marseille.

LES FONDAMENTAUX
Characters: 3 women, 3 men
Six young people meet together one evening in a small apartment. It is a brainstorming session. The next day they are putting online a kind of public educational website, half Wikipedia and Youtube. They are only missing a promotional video. Once the last bottles of beer are empty, it is time to get to work. They have to talk, a lot. Yet, what else can they talk about but their friend, who suddenly left France to go on a jihad? What answers will he find over there that he has not found here in their friendship, interacting in their own way with the world? What can they do to counter the radicalism of his commitment?

DES TERRITOIRES (NOUS SIFFLERONS LA MARSEILLAISE…)
Characters: 1 woman, 3 men
Four siblings meet, after their parents’ death, in the show-house of a social housing scheme where they spent their childhood. Between the funeral preparations and the organisation of the house’s resale, there is a great deal to worry about. The prospect of letting go the family ‘cradle’, as impersonal as it is, sets off a counterpoint to their ambivalent relations to this ‘territory’. Complications arrive when a firm of surveyors discovers human remains in the garden. The inheritance is changed completely.