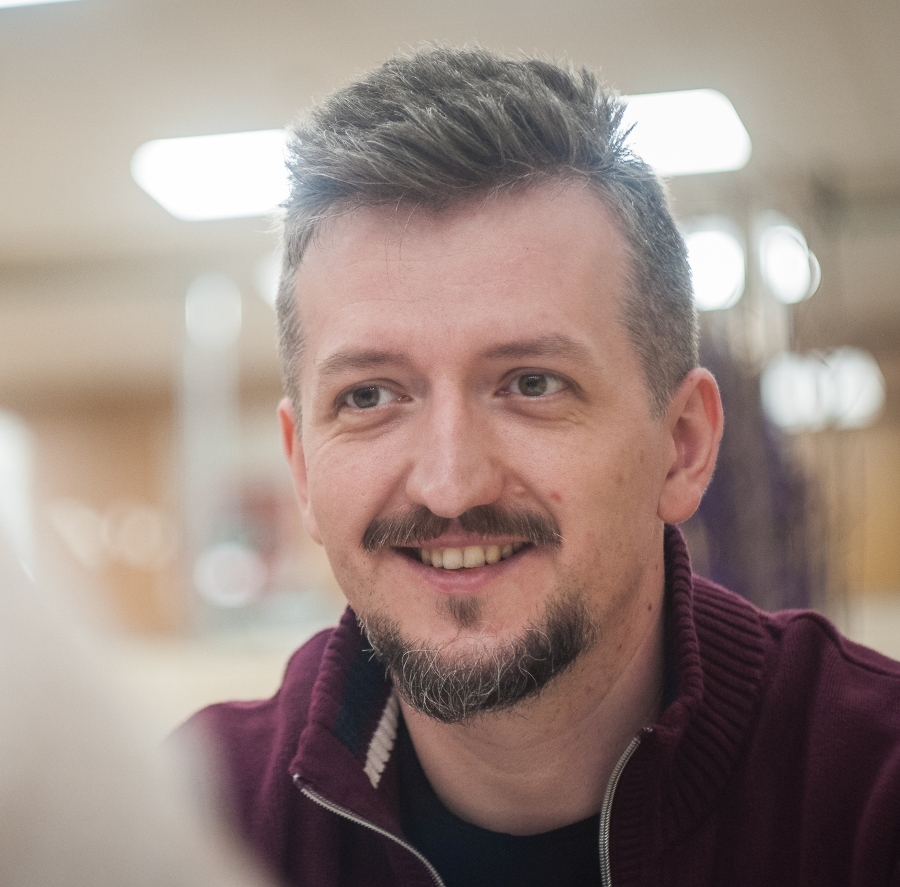 Dramatic writing is a little family member, it’s like a child to me. It would have been easier if we were friends with benefits, with a little vibe on the surface, romantic encounters once in a while, but instead I have to deal with this strange father-child relationship. It’s not the easiest thing because writing has some basic needs which I have to fulfill every day. I have to feed it, play with it, walk with it every day, listen to its whining and yammering. It doesn’t let me do my dayjobs, sometimes doesn’t let me sleep. And there are times when I run out of nappies and we both stay in big s… But then it starts to smile to me and I realize that I would never give up on it for anything in the world.

Fabulamundi involved Csaba Székely in activities in Heidelberg in edition 2013-2014.

Csaba Székely is a playwright born in 1981 in Târgu Mureș, Romania.
His first play (“Do You Like Banana, Comrades?“) won the regional prize for Europe at the BBC’s International Radio Playwriting Competition in 2009.
He has written a trilogy about country life in Transylvania – their titles are Bányavirág (Mineflowers), Bányavakság (Mineblindness) and Bányavíz (Minewater) -, examining issues such as unemployment, alcoholism, nationalism, corruption and high rates of suicide among Hungarian population in Transylvania. The trilogy has been published in a volume by the Hungarian publishing house Magvető under the title Bányavidék (Minelands). The three plays have been produced in Hungarian, Romanian and Slovakian theatres.
His historical comedy called Vitéz Mihály (Michael the Brave), about the rise and fall of a medieval Romanian national hero, has been produced by Hungary’s Weöres Sándor Theatre.
He has written two musicals: Hogyne, drágám! (Sure, honey!, produced by the National Theatre of Târgu Mureș, Romania) and Passio XXI, a contemporary take on Jesus’ last days, which was directed by Robert Alföldi at Budapest Sports Arena.
His play containing four political satires, patru piesuțe politice despre dușmani (Four political plays about enmity) has been produced by the National Theatre of Târgu Mureș, Romania.
He is one of the scriptwriters for the 3rd season of HBO Hungary’s show „Terápia“ (“In Treatment“).

Dominic is an elderly pensioner, living alone in a small flat, and none of his neighbours know who he really is: during Ceausescu’s dictatorship, he used to be one of the Romanian secret service’s high-ranking officers, a cold-blooded torturer. Dominic has no remorse, since he considers those deeds patriotic acts. He is, however, done with the past. But his past isn’t done with him: one day a former colleague visits him to ask for a favour, and on the same day he befriends his neighbour’s Aspergers daughter, who then turns his life upside down. Dominic realises that in order to deal with the past, he must go beyond limits he would never have thought himself capable of. And so, his journey to repentance begins.

Márton is the adopted son of Father Ignác, a catholic priest. They live in a small Transylvanian village, and their relationship is far from ordinary: they are lovers since the boy’s puberty. Later on, Márton falls for the village schoolmaster’s daughter, and being a talented boy, he dreams about leaving the village behind, to become an artist somewhere abroad. But in order to reach his dreams, first he must escape his adoptive father.

MINEFLOWERS
In a small unnamed and isolated village Iván lives his hopeless unemployed life, taking care of his terminally ill father. The world has not turned his way. His entourage – his half-sister, Ilonka, friends and neighbors – all go through the ordeal of finding their way out of the misery they live in. Iván starts to think more and more about his opportunity to escape from the village life: maybe if his father would die, he could move to the city and start a new life. As dark as it may seem, the massive amount of black humour actually makes this a funny play.

We are in the kitchen-cum-living room of a rural house. The front door is to the right, at the back of the stage there is a sofa, a cupboard, a stove for heating and the door to the other room, where the father is lying on his sick bed. In the foreground there is a table and two chairs. On the table there are two brandy glasses and a pocket knife. Iván is standing grumpily by the door, then he goes behind the sofa and produces a bottle of homemade fruit brandy and takes it over to the table. He gets the cork out of the bottle using the knife, which he then slips into his pocket. Mihály enters the room, he is carrying his bag, the bottoms of his trousers are wet. He puts his bag down.

IVÁN (filling the glasses) Have a drink, dear Doctor.
MIHÁLY Now I’m your dear doctor, huh?
IVÁN You always were.
MIHÁLY I always was?
IVÁN Yeah.
MIHÁLY Even yesterday?
IVÁN Even yesterday.
MIHÁLY Really?
IVÁN Really. Now, are you having a drink or not? Mihály takes a glass, they drink. Silence
IVÁN What’s the score with my old man?
MIHÁLY What? IVÁN You’ve just examined my father haven’t you? I’m asking what the news is. Silence
MIHÁLY He vomited on my trousers.
IVÁN Oh yeah, I can see. They’re good trousers, too.
MIHÁLY It’ll wash out. Silence. Iván fills another glass for Mihály IVÁN So what do you say? How long’s left?
MIHÁLY For your father?
IVÁN Well, I’m a bit worried about your trousers, too, but, yeah, I’m talking about the old snot. How long’s he got?
MIHÁLY Well… Not long.
IVÁN Still, how long?
MIHÁLY Well… As much as is his due.
IVÁN Come on, tell me. MIHÁLY What’s the point? I’m not going to start making estimates.
IVÁN I really wish you would start making estimates. If you don’t want this brandy to go to your head – while it’s still in the bottle.
MIHÁLY (sighs) About three months.
IVÁN Three?
MIHÁLY Maybe four.
IVÁN Four months?! Six months ago you said it would be two!
MIHÁLY I told you, I don’t want to start making estimates.
IVÁN I can see why. Your estimates are a load of fucking shit. You should have been a meteorologist, not a doctor.
MIHÁLY I used to be better at it. I’m not a doctor anymore. (he empties his glass) I don’t even know what I am anymore. I used to think that being a good doctor and a good man were the same thing. But they’re not, Iván. Do you believe that they’re not the same thing?
IVÁN If you say so… I’ve never tried either of them.
MIHÁLY This place changes a man. All the time it’s brawls, alcohol-induced comas and suicides. I’ve always got to be somewhere; they’re always calling me out. If I don’t visit each and every patient in person, their relatives are round threatening me with their knives.
IVÁN That’s what a knife is for – to be used.
MIHÁLY I never used to touch a drop. And look at me now; I have a glass or two every blessed day.
IVÁN A glass or two? Don’t you mean a bottle or two?
MIHÁLY Don’t you try to make me out to be an alcoholic!
IVÁN I don’t have to. You’re doing it for yourself.
MIHÁLY I’m tired, Iván. This rotten, inbred, moronic hamlet has made me tired.
IVÁN Village.
MIHÁLY What?
IVÁN Rotten, inbred, moronic village.
MIHÁLY Yes, that. Silence
IVÁN So you reckon the old man’s still going to keep dragging it out?
MIHÁLY He’s a tough old boot.
IVÁN Well I wish the cobbler who made him had put a hobnail through his balls. He fills their glasses angrily, Mihály watches him. Silence
MIHÁLY You’ve changed a lot, too, Iván.
IVÁN Me?
MIHÁLY You.
IVÁN Like fuck I have.
MIHÁLY Before you would never have asked me to kill your father.
IVÁN What in the name of a spoon up the arse are you on about? I’ve never asked you to do anything of the sort. MIHÁLY You’re lucky that I’m a gentleman and I didn’t tell anyone else about it. Though I should have done – then you’d have got your comeuppance.
IVÁN When did I ask you to do it?
MIHÁLY Don’t pretend you don’t know. Yesterday. You asked me not to bring him any more medicine. Silence
IVÁN Well, it’s just a waste. You said yourself in your weather forecast that he’s only got three months left. It’s hardly murder.
MIHÁLY To a doctor it is.
IVÁN But you said that you were going to keep looking after him just as you always had.
MIHÁLY I did. And I still didn’t bring him any medicine today.