Writing is a paradox activity. While it is the most beautiful activity that I can imagine, a trace of embarrassment sticks to it: it feels though one distances oneself too much. Although [writing] is enmeshed in the monetising machinery of the culture industry, there is an aura of freedom about it. So even if writing is not so free after all, I have the possibility to lend the characters I create, some dignity, at the very least, the struggle for it.

See below all the activities involving Dirk Laucke in the frame of Fabulamundi.

Dirk Laucke was born in 1982 and grew up in Halle (Saale)/Germany. He started to study psychology in Leipzig in 2002 but relocated to Berlin in 2004 to study Creative Writing at the Berlin University of Arts. In the same year, he was invited by Tankred Dorst to present his piece Symptom at a reading during the Salzburg Festival. In 2006, Dirk Laucke received the Kleist award for promising writers for his “alter ford escort dunkelblau” (“old dark blue ford escort”) and was invited in 2007 to the Mülheim Theatre Festival for the first time. He was voted promising writer of the year in 2007 by critics in a survey conducted by the theatre journal Theater heute. He received the Lessing promising writer award instituted by the state of Saxony in 2009, then the dramatists’ award of the federation of German industries in 2010 followed by an invitation to the Mülheimer Theatre Festival. Dirk Laucke sat as a juror in 2012 at the Heidelberger Stückemarkt. His Einigkeit und … was first staged at the Heidelberg Theatre.

There’s not enough to go round
The is about borders, the borders of the GDR, Germany’s borders 20 years after the peaceful revolution and the borders of Fortress Europe. It is about homelands. And the loss of a homeland and how terrible that can be. For Heiner, a former tank commander in the National People’s Army, November 1989 represented a turning point in his life. Now he clings to his dream: a tank driving school for civilians.
Jo has been messing about in the East since 1989. Anna dropped out of society when the GDR ceased to exist and has not felt at home anywhere since. The two’s main profession is smuggling cigarettes across the German-Czech border. Now they have found a driverless lorry. Crammed full of smuggled cigarettes. And two dozen Chinese illegal immigrants. But Heiner does not want to know anything about all that. He is expecting a visit – his daughter Manuela, a vaguely far-left political activist with an unsettled lifestyle.
In this panorama of poorly lived lives, the biographies weave together slowly to build up an image of four people without a homeland viewed from multiple perspectives. They have lost the lives they used to lead and are yearningly wistfully for new ones.’

Einigkeit und…
Helen Stiepel, a journalist, travels to Hungary to write report about twin city Kolösztemiskata. Her local translator is one George, who seems to show her pretty much everything about racist trends in modern-day Hungary. What he does not do, is to take her to Kolösztemiskata. A parallel thread narrates the story of Max, Helen’s son: at a treatment station for dementia patients, he stumbles on a Nazi era crime committed by the German police against Sinti and Roma gypsies. Max finds his own way to deal with the patient who was involved in the crime. Perhaps it is the experience of dealing with the subject that makes him more receptive to his mother’s travels, especially to a country where Neonazis have occupied entire Roma villages. He is worried about his mother and follows her. This is a theatre piece that squarely deals with the discrimination of Sinti and Roma in the EU. Einigkeit und… A play about a research project in Hungary and Germany.

ÁGNES
It happened on 4 November 2008, the first killing.
Two people in Nagycsécs who lived in the last house of a settlement, were shot. For three weeks, no newspaper printed anything about it, except that the background was supposedly a feud between rival Roma clans. After three weeks, when I was in the region I contacted the survivors and wrote a neutral article with the title: Manhunt in Nagycsécs. Manhunt, because that’s what it was. I wrote about a woman and her deaf born child, her difficulties. Following their tradition, they did not hand over the child to the hospital. They cared for the child and raised it accepting the child’s handicap as God’s will.
… I’m sure Schorsch has told you about the situation in Tatarszentgyörgy. On the morning of the 23rd… tomorrow’s the anniversary. When on 23rd February the 26-year old father and his 5-year old son were killed, the authorities reacted very unprofessionally: the fire brigade said there’d been a fire because the electric lines had not been laid by a professional. (The house was new, built 2 years ago, properly). The doctor failed to see the … the bullet entry wounds. The police did not find the bullets. Everyone, just everyone made mistakes, mistakes and more mistakes! Even the Roma believed that it was just about a conflict between Roma but they were certain that they wouldn’t become the victims of such an attack. Ask Koka Jenö from Tiszalök! Of course they also talked about it but they were sure that this kind of terror could not happen to them. Her husband went to work every day at 10AM. They were hardworking, very hardworking folk.
Koka Jenö stepped out of his house, into the garden and someone shot him dead. Why? For the same reason. And you know what really feels bad? I wrote the sentence with “manhunt”. You know how it is used to mean today? – Gypsy hunt.

Schorsch and Helen at Matyas ter in Budapest.

SCHORSCH
Özvegy. Widow. What is the first thing that comes to mind when you hear the word? When I hear it, I think of an ageing woman in black, black rings under her eyes and sometimes she chuckles because there is so much worth remembering: the birth of children, the games behind the house, good and bad days, the summer, the winter, everything, just everything.

HELEN
She’s standing beside herself in the Budapest’s 8th district at Matyas ter. She has just thrust some money – God knows how much – into the hands of a beggar with blue-rimmed eyes and threadbare shoes. And there stands the young woman called Renata Csorba who is already supposed to be a widow.

SCHORSCH
That’s the picture of her husband Robert. He was 28, her son just 4. The widow lights the candles.

HELEN
I don’t know what I’m doing here. My interpreter said I should speak to the widow and to a man called Sigo Jenö and to the minister of a Methodist church, to activists…

SCHORSCH
Go there, wait for a postcard which says: Dear Ms Stiepel, I’m Özvegy, widow, 27 years old. Will you come by for an interview?

HELEN
Now she’s lighting a candle in front of the picture of his son and I can’t get a word out.

SCHORSCH
There’s going to be no postcard in that sense. That’s your job, Ellen Stiepel. Do you see any other representatives here worthy of western media attention? There’s no politics here, no prime minister who’s going to make a speech, not even the mayor has made an appearance. This is your journalist’s opportunity – before the candles go out, sweep everything away and you sit in a train to Germany and can’t even write the history of Kolösztemiskata.

Some days before Paris attacks on the 13th November, Dirk Laucke, guest at Théâtre Ouvert for Fabulamundi Project, wrote this journal.   Who cares who the people is? by Dirk Laucke Success is not very reliable. Especially when you have it. You spend even more energy to hold on to a certain state of fortune than […] 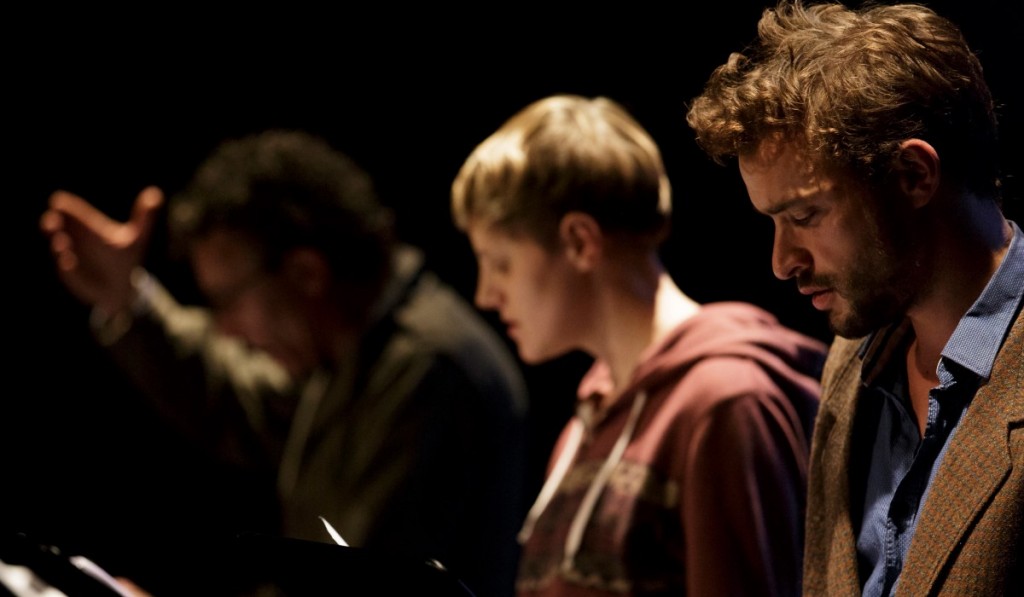 Here some pictures of "There’s not enough to go round", written by Dirl Laucke. The author has been invited in November 2015 at Théâtre Ouvert for the stage presentation of his text.