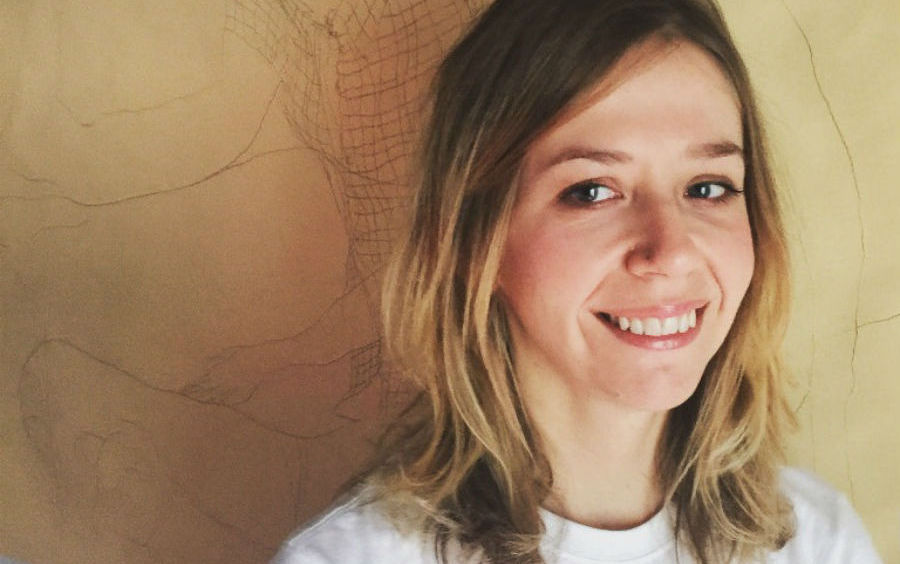 Theatre has not to analyze and provide numbers, chronologies or statistics. I think that theatre translates. It doesn’t enumerate and it doesn’t explain. And I’ m not talking about literal translation, I talk about metaphor, vision, point of view. Theatrical writing is for me looking at the horizon from the door’s peephole. I cannot see everything, I’m not supposed to see everything, but from what I perceive I can imagine endless possible worlds. And it is really in that multiplication of possibilities, and in the close and silent relation with the spectator, that I find revolutions of sense and landscapes that I have never seen.

See below all the activities involving Francesca Garolla in the frame of Fabulamundi.

Francesca Garolla (Varese, 1981) studied Philosophy at the University of Milan and graduated in Directing at the Accademia d’Arte Drammatica Paolo Grassi. In 2002 she has been the stage director and dramaturg for Sete, based on Yema by Federico Garcia Lorca, presented at Giffoni Teatro Festival and finalist at Premio Chiara Giovani. In 2004 she has started collaborating with Teatro i in Milan, becoming the company’s dramaturg, author and member of the artistic committee. She was dramaturg, assistant director and actress in Vor dem Ruhestand by Thomas Bernhard, Dare al Buio by Letizia Russo, Incendies by Wajdi Mouawad, Hilda by Marie Ndyaie and Combat de nègre et de chiens by Bernard-Marie Koltès. She was director and dramaturg of Elettra. Quel che rimane based on Électre by Yourcenar (2006) and of Non dirlo a nessuno, based on Der Gute Gott von Manhattan by Ingeborg Bachmann (2008). In 2010 she wrote N.N., selected, translated and presented at Le Théâtre Scène Nationale de Saint-Nazaire, at the Festival Ring / La Manufacture – CDN Nancy-Lorraine and at the Théâtre National Populaire de Villeurbanne La Colline for the project Face á Face – Parole d’Italia per scene di Francia. In 2013 she wrote Solo di me – se non fossi stata Ifigenia sarei Alcesti o Medea which has been translated and presented in Romany at  Teatrul Odeano of Bucarest for Fabulamundi Playwriting Europe Crossing Generation (2015) and in French at Le Rencontres d’étè de La Chartreuse, during the Festival d’Avignon, for Face á Face project. In 2016 and in 2017 she has been the author in residence at La Chartreuse Centre national des écritures du spectacle to write her latest text that was translated and presented during the festival for the Rencontres d’été.
In addition to her active participation in Teatro i’s cultural project, she has developed a strong interest in dramaturgic research and is delving into the development of an autonomous experimental path in all the expressions of theatrical writing and mise-en-scène.

YOU ARE FREE
Characters: 4 women, 2 men –  available in Italian and French
Haner left for Syria. She joined Daesh. She has adhered to a social, cultural and ethical system entirely different from the one we belong to.
But Haner does not have Middle Eastern origins, she is not a migrant, she is not an outcast, she has not been manipulated and she is not mad. Haner is a young French woman who can do and can be whatever she wants.
Haner is free to choose and so she does, she chooses her own freedom. A fierce freedom that can’t be controlled, defined or interpreted, a freedom that goes beyond the value of death and life. An improbable, obscene, incredible freedom.
Can we understand the reason of Haner’s choice? Is there a reason? Can we accept a kind of freedom that doesn’t consider life valuable? A freedom that doesn’t consider the individual as something precious to be protected, but only a function or fragment of a community? A freedom that kills?
Only seven days, seven as seven are the days of creation in the Bible and the Koran, and there is only the time of the show to understand everything.
Yet, if we are really free, we should be able to tolerate the freedom of others. Whatever it is.

DON’T RUN HAMLET
Characters: 1 man, 1 woman – available in Italian
May 29, 1993, former Yugoslavia, War. An ambush to a humanitarian aid train near a road called Diamond Route.
Three people are killed and two escape.
Three dead and two alive.
These are the facts.
One of the victims was my uncle and I was less than twelve years old when he died.
He did not try to escape, he stood still, motionless, and was hit by three bullets.
They found the body a couple of days later. Without shoes.
I wonder why.
Death, who does not like formalities, left him naked. A ridiculous thing.
One of his sisters at the funeral said that she had dreamed him. And he said: “It was enough for others not to run and it would be all right. That was enough. Just that.
Just don’t run, to stay alive. ”
Writing takes this episodic, autobiographical and chronicle (or story) element into account, seeking, through two parallel monologues, to find a meaning to something that does not have it: pain.
And death appears for what it is: stupid and ridiculous.
But what death am I really talking about? His? Mine? Ours?
We all have our own death.

N.N.
No judgement, no moralism nor nostalgic gaze, only an analysis of the present through the eyes of a generation born in the 80’s and even in the 90’s. A generation which haven’t seen nor lived the fervour of recent history. Nevertheless it brings the invisible scars of this history: sons struggling to metaphorically kill their parents and who, unable to elaborate loss, cannot become adults and reconcile with history. NOMEN NESCIO, Latin for ‘name unknown’. N.N. was a formula used to identify the ‘sons of nobody’. Son of N.N., son of unknown father, without a name, therefore without history. N.N. as in ‘no name’, as in ‘nothing’, as no thing.

SOLO DI ME. Se non fossi stata Ifigenia sarei Alcesti o Medea
Three women who could be one, a daughter, a wife, a mother. Iphigenia, Alcestis, Medea, in a rewrite in which they meet for the first time and dialogue with eachother. Three ways of living this world, three experiences, one point in common: sacrifice. If it is true that humans are ‘social animals’ and that women in particular seem to find a better definition of themselves in relation with the other, as daughters of, lovers of or mothers of, it is also true that there is a constant search for an autonomous self-affirmation. Iphigenia tries to become heroine through her death by her father’s hand, Alcestis finds the possibility to become a saint by giving herself up, and Medea, through the homicide of her sons, can become a goddess, who decides upon life and death.