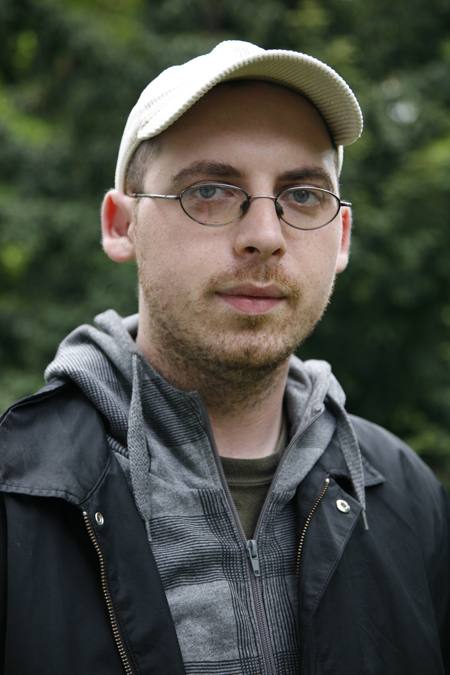 As a playwright I’ve always been interested in creating an unforgettable experience for an audience, challenging the way we participate in a story both as storytellers and audience members. I see the theatre experience as a magic box that unfolds to offer, for the ones watching, urgent hints and questions on their condition. Growing up surrounded by music (my father was a jazz guitar player), I’ve always looked at a theatre piece as a musical structure, containing a dimension that’s beyond rationality, addressing mostly our subjectivity and sense of feeling. I think that when we get into that zone as an audience participating together in a story, theatre becomes the most exciting of live art forms. I also believe performance space should not restrict imagination. In a world where mainstream theatre has become so expensive to make, alternative ways of reconsidering what “performance space” is have been of great inspiration to me lately. Site-specific, immersive theatre has been one of my major interests in the past few years.

Fabulamundi involved Peca Stefan in activities in Berlin and in Târgu Mureș.

Peca Ştefan (13.08.1982) studied dramatic writing at New York University, was a resident of the Royal Court International Residency and CEC ArtsLink Playwright in Residence at the Long Wharf Theatre in New Haven.
He was the winner of the first dramAcum contest in Romania, in 2002. His work has been presented widely in Europe and the United States. His plays have won several awards, including the Heidelberg Stuckemarkt Innovation Award (2007) for Romania 21. He was also one of the 5 European Playwrights selected in the Berliner Theatertreffen Stuckemarkt 2010, with Wire and Acrobats.
In 2012, the production of his play Targoviste de Jucarie (Playground Targoviste) was selected in the New Plays from Europe festival in Wiesbaden. He was one of the top 35 European playwrights featured in the 35th Anniversary Edition of the Berliner Theatertreffen in May 2013.

Gigantic
When his father pays him an unexpected visit in his Bucharest apartment, Paul gets to realize that the diabetic old man has actually left his marriage and is about to move to New York for good in order to make possible his life dream of playing jazz at the Blue Note. While trying to get his father to change his mind, Paul reaches a number of revelations about his own life and some of the actual possibilities of true love.

The Impossibility of Closeness
A photographer is abducted by a strange woman who wants to send him to Siberia to be part of the greatest still life art installation. A girl has just learnt how to fly. A man and a woman have been playing tag all their lives in the city of the Blind. In Japan men have decided to substitute women with sex toys and it must be the end of the world. All of the sudden, Kangaroos roam the Earth, guiding lost souls towards true closeness. “Love will tear us apart”, “Small Metal Gods”, “Heroes”, “Hurt” and “After Hours” are the soundtrack of limbo. Is closeness possible or can only kangaroos achieve it? In this surrealist dark journey through the after hours, life and death are only a matter of perspective and the question is: how much of a kangaroo can one be?

LO-FI – Cassette One
Virgil returns moves to his mother’s apartment after a mysterious fire got him fired from a Bucharest paper factory. In his old room he rediscovers the home recorded, lo-fi music he had recorded all throughout his teenage years. Much to his surprise, he meets homeless ex-musician Paco who has been secretly living in Virgil’s room for a number of years. Paco begs Virgil to start writing again so they can participate in the worldwide competition of Lo-Fi World Dot Com. While initially extremely reluctant, soon enough Virgil is forced to revisit his music when the strange Snake Woman and the police come knocking at his door. Tapes came to life to reveal the mystery of Virgil’s life, where nothing is what it seems. In this hybrid musical play, illusions make you who you are.