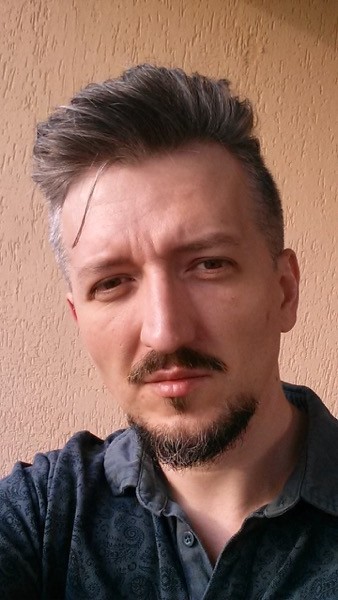 Csaba Székely is a playwright born in 1981 in Târgu Mureș Romania.

His first play (“Do You Like Banana, Comrades?“) won the regional prize for Europe at the BBC’s International Radio Playwriting Competition in 2009.

He has written a trilogy about country life in Transylvania – their titles are Banyavirag (Mineflowers), Banyavaksag (Mineblindness) and Banyaviz (Minewater) -, examining issues such as unemployment, alcoholism, nationalism, corruption and high rates of suicide among Hungarian population in Transylvania. The trilogy has been published in a volume by the Hungarian publishing house Magveto under the title Bányavidék (Minelands). The three plays have been produced in Hungarian, Romanian and Slovakian theatres.

His historical comedy called Vitéz Mihály (Michael the Brave), about the rise and fall of a medieval Romanian national hero, has been produced by Hungary’s Weöres Sándor Theatre. He has written two musicals: Hogyne, drágám! (Sure, honey!, produced by the National Theatre of Târgu Mureș, Romania) and Passio XXI, a contemporary take on Jesus’ last days, which was directed by Robert Alföldi at Budapest Sports Arena.

He is one of the scriptwriters for the 3rd season of HBO Hungary’s show „Terapia“ (“In Treatment“).

2015: Ferdinand Vanek Award for They are Animals, a short political play – Czech Republic 2015: Play of the Year (for Michael the Brave) – Hungarian Theatre Critics’ Association

2011: Szép Ernő Award (for best debut as a playwright) – Hungary

Dominc is an elderly pensioner, living alone in a small flat, and none of his neighbours know who he really is: during Ceausescu’s dictatorship, he used to be one of the Romanian secret service’s high-ranking officers, a cold-blooded torturer. Dominic has no remorse, since he considers those deeds patriotic acts. He is, however, done with the past. But his past isn’t done with him: one day a former colleague visits him to ask for a favour, and on the same day he befriends his neighbour’s Aspergers daughter, who then turns his life upside down. Dominic realises that in order to deal with the past, he must go beyond limits he would never have thought himself capable of. And so, his journey to repentance begins.

Márton is the adopted son of Father Ignác, a catholic priest. They live in a small Transylvanian village, and their relationship is far from ordinary: they are lovers since the boy’s puberty. Later on, Márton falls for the village schoolmaster’s daughter, and being a talented boy, he dreams about leaving the village behind, to become an artist somewhere abroad. But in order to reach his dreams, first he must escape his adoptive father.