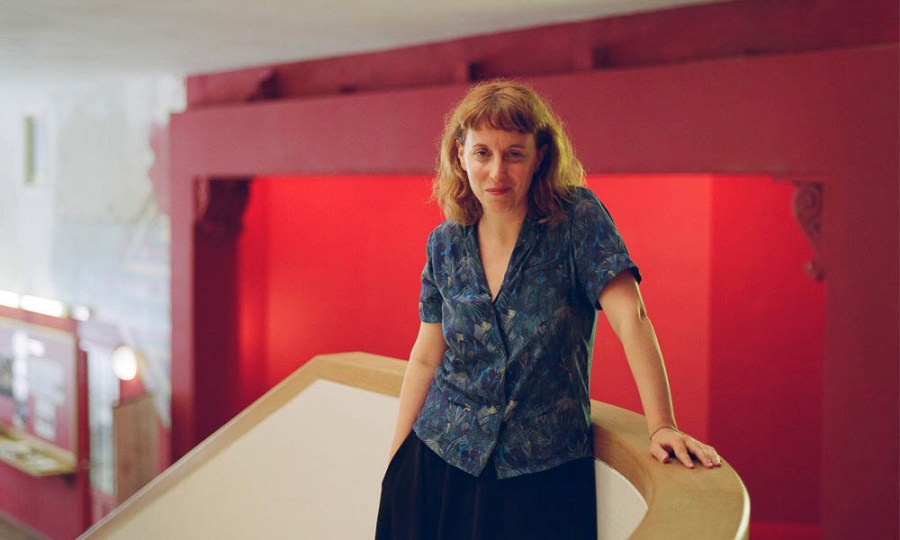 Theatre is a hands-on art that is constructed collectively. It is a meeting place where terribly ephemeral elements converge with very archaic echoes. Material, physical and prosaic aspects coexist with the deepest and the loftiest concepts. Theatre is here and now and yet, however, we want to eternalise ourselves in it. It is a game, but playing it is a serious thing.

When I write plays for theatre I try to ensure that the unforeseeable and the unconscious, humour and pain all emerge. I try to ensure that nothing is left to fester. When you believe that you have understood, when you have judged what you see, that is when the other, the mysterious, the questioning of convention appears. I try to hold a dialogue with tradition; I don’t like plays that propose an evident break with it. However, I am no lover of classifications. I seek a chink of freedom and of frenzy. I prefer the amorphous, the imperfect and the living, to spotless structures. I prefer criticism and uneasiness to unanimous applause.

See below all the activities involving Victoria Szpunberg in the frame of Fabulamundi.

Playwright and teacher of playwriting at the Institut del Teatre and at the Escola Superior de Coreografia de Barcelona. In 2000, she was invited to take part in the International Summer Residency for Emerging Playwrights at the Royal Court Theatre with her first play. Since then, her works have premiered at different national and international festivals and theatres. Besides her career as an author, she has collaborated with different choreographers, signed theatre adaptations, worked as a director and written plays for the radio and sound installations. She has also participated in theatre and education projects and is a collaborator of the Patothom school for social theatre. Highlights among her works include Entre aquí y allá (Lo que dura un paseo), The Shop Window (Teatre Nacional de Catalunya, 2003), Esthetic Paradise (Sala Beckett – Festival Grec, 2004), The Speaking Machine (a production that she also directed at the Sala Beckett, 2007, and at the Sala PIM in Milan, 2008), El meu avi no va anar a Cuba (Festival Grec – Sala Beckett, 2008), La marca preferida de las hermanas Clausman (Teatre Tantarantana, 2010), Boys don’t Cry (Teatre Tantaranta, 2012) and l’Onzena Plaga (Teatre Lliure, 2015).

The Speaking Machine
We are transported to an uncertain future. An Argentinian woman who works as a talking machine, a dog that gives pleasure, and a landlord. A triangle with more than three points.
This is the story of a relationship based on power, dependency and, why not, love. A cruel and romantic story where machines and emotions fuse in a spiral of events on the frontiers of existence.
“The play proposes a fairly atypical initial dramatic situation. The play is strange from the very start: a woman who never gets up from her chair is talking to a bloke who is fiddling with a remote control. Her discourse, his attitude, and above all the connection we see between the two of them, show us a grotesque, oneiric, theatrical, non-naturalist world… So that the play did not turn out to be too cryptic and because I am especially interested in not leaving the audience beyond all comprehension, I opted to use a linear structure.
The woman’s immobility forced me to find movement in the language, to work especially on the rhythm of the exchanges.
Since the play begins with quite an extreme situation and the appearance of the pleasure-giving Dog makes it even more extreme, I thought it was important not to abandon the expectation created. This requires inventive work and not being afraid of an imagination overflow that could put the theatrical situation at risk. The action advances continually; except for two scenes that represent two of her dreams, the rest propose a linear treatment of time. I would say that the work combines a grotesque and poetic world with a very specific routine everyday life.”
Play available in Catalan, English, French, Hebrew, Italian, Polish and Spanish.
Play for 2 actors and 1 actress.

The Eleventh Plague
A couple who are unable to separate for financial reasons try to maintain an appearance of normality, until a toxic secret comes to light and reveals all the rottenness of their innermost everyday life.
This play is not intended to be about relationships, but about how mercantilism destroys everything. When the eleventh plague comes knocking, all you can do is pull down the shutters, put on Handel’s Messiah and scream at the top of your lungs.
“In the biblical text, the tenth plague, the death of the firstborn, was the harshest. But, even though as a grief beyond repair, it was contained within the context of the family, the famous “social cell” that sustained the whole of society. Today this cell seems to have entered into an irreversible oncological crisis, as traditional forms seem to be collapsing and solid structures are being eaten away by an army of rats.
In Captivity, the last great punishment convinced the Pharaoh to give the slaves their freedom. What must we offer today, and to who, to obtain the same?
Suggestively, I don’t know exactly why, although I have a vague intuition, the form adopted by L’onzena plaga is closer to what would be canonical theatre; a story, a progressive dramatic form, dialogues, characters… And even a sense of humour. As if it were a desperate and grotesque last-ditch attempt to grab on to some old pillars that are about to come down. Perhaps that is a way of contrasting history with the present even more, and showing melancholy for certain structures that “offered” security.”
Play available in Catalan.
A play with 9 characters that can be performed by 3 actors and 3 actresses minimum.

Boys Don’t Cry
Two men, old childhood friends, meet again after years without contact. One has triumphed in life and yields political power. The other, an artist, feels he’s a failure and needs help. The two old friends will meet again in opposed situations, under the eye of a woman who knew them very well when the song that used to play was “Boys Don’t Cry”. Now, however, it is time for the boys to cry.
This play is available in Catalan and Spanish
Play for 3 actors and 1 actress.

Boys Don’t Cry
Two men, old friends since their teenage days, meet by chance after years without seeing each other. Jordi holds an important position in the politics of his city; Walter ekes out a living at a job that does not fulfil him; he feels lost and a failure and he needs help. Asking is very difficult; helping is too. One acts as a mirror for the other. Frustration, resentment, social pressure and a large helping of contained violence. The two men will enter into a dizzying dialectic, brimming with repressed plans and desires.
In the background, the memory of the past, the melancholy of lost youth, of a time when people believed everything was possible, the political transition, the “decade of change”, la movida, The Cure…

La marca preferida de las hermanas Clausman
The 1990s. The Berlin Wall has come down. Azúcar Moreno take fifth place at Eurovision. A small town in southern Catalonia is home to Sara and Valentina, the teenage daughters of political exiles. Outside, a happy, provincial place with its designer brand fashion… Inside, a chaotic dining room, a small fictional space where the sisters play at acting out their parent’s life stories. A space where they play and also where they survive. In the background, a door that leads to their mother’s room nearly always stays closed. 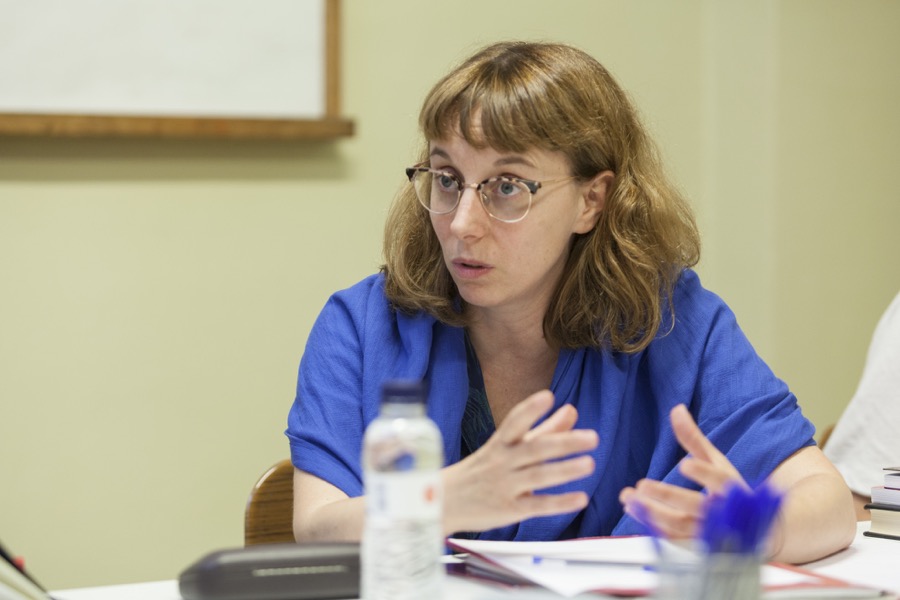 From 9th to 14th July the Spanish author Victoria Szpunberg led a workshop for beginners/non-professionals entitled What are the real rules? at Sala Beckett in Barcelona. Here we publish some pictures of the event. 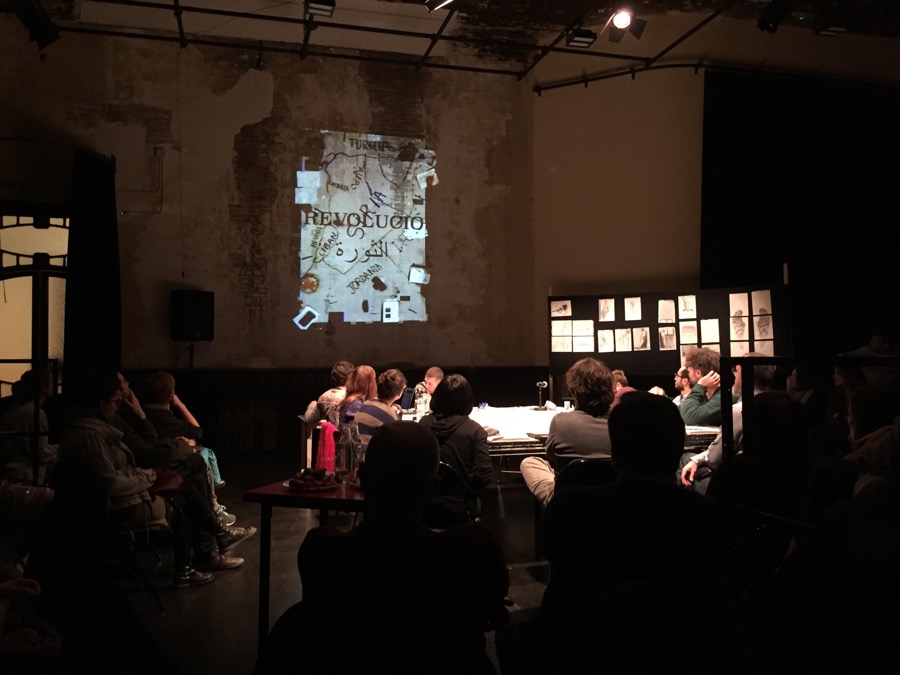