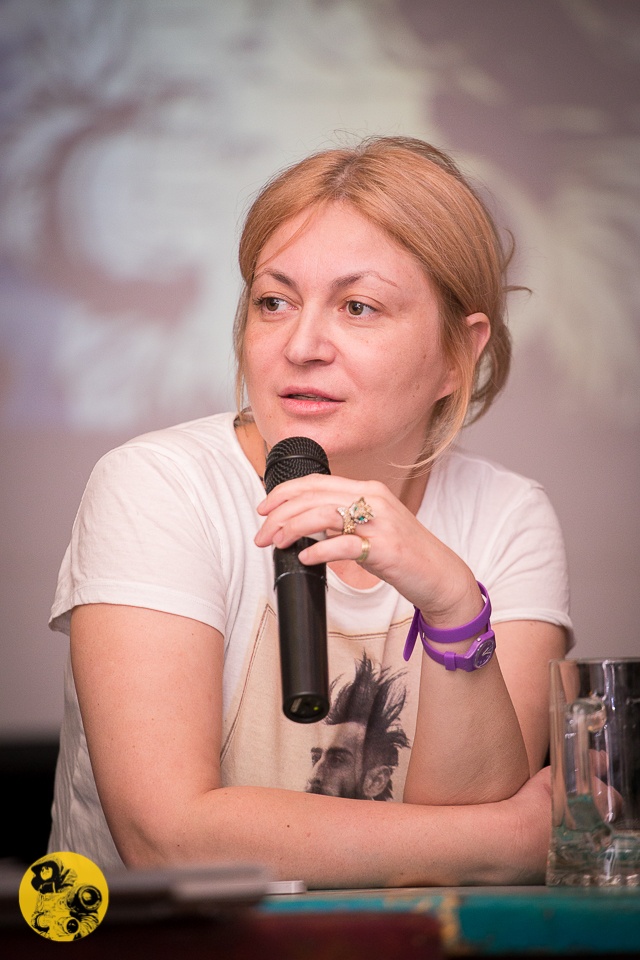 I am a theatre director and I write plays that I want to stage myself for the actors that I enjoy working with. I am interested in writing about and with people whose story has not been performed: juvenile offenders in prisons, Roma children from villages without electricity who do not even know how to write, Jewish people sold or not by Ceaușescu to Israel state in the 70s, prostitutes from the Bucharest’s beltway, priests expelled from the Romanian Orthodox Church.

See below all the activities involving Andreea Vălean in the frame of Fabulamundi.

Andreea Valean is a well known playwright and theater director. She graduated the Academy of Theatre and Film, Bucharest and is one of the founder members of dramAcum, one of the best projects in the field of contemporary theater in promoting young directors and emerging playwrights. She is also an appreciated and awarded scriptwriter and producer in cinematography.
2014  Krzysztof Kieslowski ScripTeast Special Mention Winner for the Best Eastern and Central European Script  for the script  my Life Beats Reality
2014 director and producer of  the short “There is nobody in this world”
September 2013 director ” Green Hours” site specific serial theater at Monday Theater in Bucharest
June 2013, 2 experimental performances ” The Corect Price/ Sold Jews” at Odeon Theater
2012 touring with the performance “Ciorica/ caravane of dreams”, a puppet show based on a gypsy folk tale. We tour in more than 60 remote villages and performed for more than 1000 children that attended for the first time in their life a theater performance.
May 2012 ” Dans”  experimental video, director and producer
May 2011 Hungarian Theatre in Cluj, “Rosia Montana” director. The performance won the prize for best performance in the International Theater Festival in Timisoara.
June 2011 assistant director  to Adrian Sitaru at ” From Love with the Best Intentions”
October 2010 Lark Theater New York,  play development for “Don’t Cry We’ll All Meet on The Other Side”
2010 the film based on the play  “If I Want to Whistle, I Whistle” won Silver Bear in Berlin Film Festival
2007 opening at National Theater in Timisoara with “KIKI and BOZO” (writer)
2007 National Theatre of Operetta the baroque opera “Pyram and Tysbe” (director)
2006 scriptwriter and associate producer for the movie “The Way I Spent the End of the Word”, Cannes Film Festival, Une Certain Regard, the Best Actor Award
2005 Folkteatern Göteborg with “KIKI and BOZO” (writer)
2004 Jewish Theatre Bucharest “The Last Game of Taroc” with the support of the European Association for Jewish Culture (writer, director).
2003, scriptwriter for the short movie “Traffic” (35 mm, color). The movie won Palm d’Or in Cannes Film Festival 2004
2002 Odeon Theatre Bucharest “Norway. Today” by Igor Bauersima (director)
May 2002 , script for the short movie “17 minutes late ” (35 mm, color, director Cătălin Mitulescu), selected to Cannes Film Festival – Cinefondation,
March 2002, participant at Ohrid (Macedonia) workshop for children plays. I wrote the play “Kiki and Bozo”. The play was translated in Macedonian, Albanian and English.
March 2002, my short play ” Where’s the Smoke Going” was presented at Royal Court Theatre, London,
December 2001 – winner of Eureka’s Trans-Europe Script, Istanbul,
July 2001 – Royal Court International Residency, London
March 2001, the play “Conspiracy in the Synagogue” was nominated as The Best Play of the Year 2000 in Romania by UNITER. It was translated in English, German and Hungarian.
January 2001- director and producer of “Family Stories” by Biljana Srbljanovic, TANDARICA Theatre Bucharest (the performance was presented at Theatre International Festival -Piatra Neamt and Young Actor Gala-Mangalia)
November 2000, the play “When I Want to Whistle, I whistle” was published in “Balkan Plots” at Aurora Metro Press, London,
October 2000, translator of the Icelandic children play “The Wild Children on the Blue Planet” by Andri Snaer Magnason,
June 2000 representing Romania as a playwright at Bonn Bienniale,
February 2000 – adaptation for the stage and director of “Emigrants” by Slavomir Mrozek at the Casandra Theatre Bucharest
May 1999 – winner of the Script for Long Feature Movie Contest organized by the National Office of Cinema,
December 1998 – director of the “Poetry Performance”, at the Cotroceni Palace,
May 1998 – participation at the European Playwrights Festival, Berlin, representing Romania,
April 1998 – premiere of play “When I Want to Whistle, I Whistle”, at the National Theatre Tg. Mures
October 1996 -journalistic practice at MTV London

Dacă vreau să fluier, fluier (If I Want To Whistle, I Whistle)
“If I Want To Whistle, I Whistle”, probably one of Andreea’s most popular plays, which inspired the homonym award-winning feature film (Silver Bear, Berlin Film Festival 2010), was based on a study that she made on the young criminals from the Romanian prisons. The play was published in the volume “Balkan Plots” by Aurora Press London.

Kiki și Bozo (Kiki and Bozo)
‘Kiki and Bozo’ is piece about confrontation with death, about last journey, about correcting mistakes in the point when you have to even the score. An old man Bozo and the girl Kiki are near the sea. Bozo is going to the sea to die, and Kiki escaped from everyone because she is afraid of the death of her dog Nini. They spend little time together, but it’s enough for them to realize what death is, but also what are the friendship and love. Orchestra that plays all the time on the stage represents the soul of the old man Bozo. He eventually gives his soul to Kiki and with that gesture he is not only giving himself a new lease on life but he also gives to Kiki priceless value of understanding that the main characteristics of life are that it is momentary and imperfect.

Ultimul joc de Taroc (Conspiracy in the Synagogue)
Few years ago I wrote a text inspired from my grandfather’s life and his friends’ “Conspiracy in the Synagogue”. I was fascinated by the way he has gone through life and through all bad jokes that history played on him. The accentuation of anti-Semitism in the 30’s and the Jewish enrolment in the communist party seen as a chance for them to escape it; the detention period for the fact that the communist party was illegal in Romania; the deportation in Transnistria at the beginning of the 40’s; the liberation in ’44 after which, many of them changed their names pushed by a desperate wish of history not being repeated with their children; the communist period after 1944, when a new detention period followed for those who were “more communist than necessary”, meaning those who told it like it was; the difficulties through which those who wanted to emigrate to Israel in the 50’s had to go through; the diminishing to extinction of the Jewish communities; the solitude of those who remained behind and the period of the so-called “anti-Semitism without Jews”.
Most of their youth, these people have fought with a history that was against them, but this didn’t cause them to lose their appetite for living and to stop enjoying the beautiful side of life. Through “Conspiracy in the Synagogue” I wanted to tell their story.
This text was written and performed at The Jewish Theater in Bucharest with the support of “European Association for Jewish Culture”