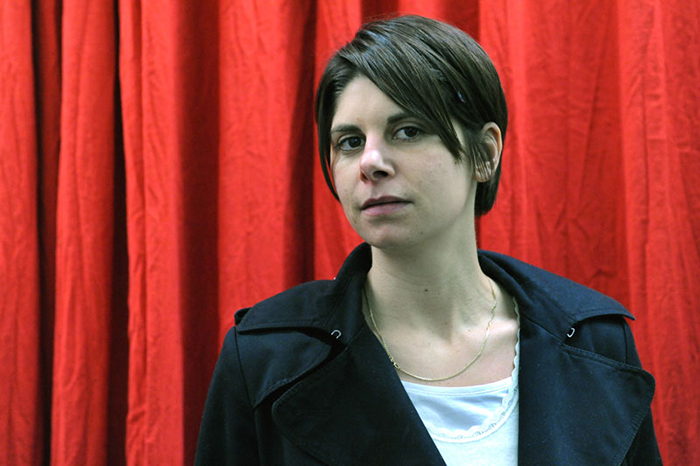 All my characters share the feeling of isolation in a community of humans. I want to know why! And how much that has to do with the social surroundings and how much with the individual. Going back in history to [find out] has nothing to do with past but rather underscores the dissolution and circularity of time. I can draw upon events that have already been analysed in detail. Theatre for me is a place where, for a short period, it is possible to live in an Utopia where thinking, experimenting and doing are possible.

Fabulamundi involved Anne Habermehl in activities in Turin and in Rome.

Anne Habermehl (born 1981 in Heilbronn/Germany) studied creative writing at the Berlin University of the Arts from 2004 to 2008. Her theatre pieces have been performed at several leading stages including Thalia Theater Hamburg, Bayerisches Staatsschauspiel Munich and Schauspielhaus Vienna. She took part at the 2008 Dramatists’ Workshop in Berlin and received the award for commissioned works. Her Letztes Territorium (Last territory) was further invited in 2008 to be performed at the Hamburg theatre festival and in 2009 at the Radikal Jung theatre festival. She received scholarships of Authors’ Lab of the Schauspielhaus Düsseldorf and the Obrador d’Estiu Sala Beckett in Barcelona. She was invited to direct and premiere her pieces Narbengelände (Landscape of Scars) and Luft aus Stein (Air from Stone) at the Theatre Authors’ Festival 2011 and 2013 at the Deutsche Theater Berlin. Anne Habermehl lives in Berlin.

Luft aus Stein
– selected text for The dangerous opportunity –
Ruth, born in 1922, Hanna, in 1943, Paula in 1980 – three women whose biographies could not be more different and are yet inseparably linked. Ruth has lived through the horror of the Second World War. She has lost her newborn son Anton in a bombing. Her daughter Hanna will try in vain in later years to break Ruth’s silence about the events of those years while Hanna’s own children Paula and Anton grow up in a much freer society, but face problems of a different kind in the wake of its demands for global thinking and greater flexibility. Hanna is made aware of Paula and Anton’s incestuous love relationship, seemingly their means to escape an overly complex world, only when Anton tries to kill himself and his sister. The situation suddenly reflects the collective silence after 1945 and the inability of the individual to talk about the here and now even though the ground realities are entirely different.

1963
…
Ruth What should I do with your room?
Hanna I don’t care. Books. Your sewing machine. A piano. What do I know?
Ruth Do you see a piano here anywhere?
Hanna Buy one.
Ruth I haven’t played a piano for twenty years.
Hanna You could start again.
Ruth And who’s going to teach me?
Hanna Not again…
Ruth I don’t know what I’ll do without you.
Hanna I can’t go on like this.
Ruth What?
Hanna Deal with your crap all the time.
Ruth Stay.
Hanna No.
Pause
Ruth I’ll go away too. What am I going to do here without you.
Hanna You live here.
Ruth It’s all chance, see? If we’d not been there by chance, just at that time in that railway station, we wouldn’t be here now. And I would have decided, by chance, to go in another direction: we wouldn’t be here. So now, I can go someplace else too, by chance.
Hanna Everyone belongs somewhere.
Ruth That’s Nazi crap.
Hanna Nazi crap? To want a home?
Ruth Places are names on a map, see? Nothing else. We don’t belong anywhere. Not in any time. Not in a world. Not in an age. Not in a body. Not in a mind. We drop down from the heavens into nothingness. Into this world like a drop of water. Then we stagger along the fringes of this world.
Hanna Do you believe there’s a God?
Ruth Oh, please.
Hanna You don’t believe there’s a God, right? You don’t believe in anything. Nothing.
Ruth Sure.
Hanna In what?
Ruth In children. I believe in them.
Hanna And what do you want to give them?
Ruth –
Hanna You want to teach children to love life. What do you want to give them?
Ruth I… I don’t know. They’re so small. So soft. They’ve not seen anything terrible. Or done anything. They laugh like… they break my heart when they laugh. I want it to stay that way. I don’t want them to see anything horrible. Don’t want them to stop laughing.
Hanna I’ll also have children. And I shall protect them.
Ruth You are mean.
Hanna No.
Ruth Yes.
Hanna You taught me nothing. Only panic.
Pause
Ruth Come, let’s dance.
Hanna I don’t want to dance.
Ruth Just once. Please. To say goodbye.
Hanna –
Ruth These hips, they’re from your father.
Hanna –
Ruth I didn’t want him any more. When he returned. He was like a rock. A rock full of blood. Invisible blood.
Hanna –
Ruth And he sang all the time. The whole day.
“The sun here feels so cold
The flowers jaded, the life so old.
And when they talk it’s nothing but air.
I’m a stranger everywhere.”
All this romantic bullshit.
Nobody can live with a rock. I threw him out. The singing rock. The rock with blood.
Silence
Hanna Where is my brother?
I had a brother.
Where is he?
Ruth –
Hanna He would’ve been buried somewhere.
Ruth No.
Hanna Why?
Ruth –
Hanna I miss him. I’ve been searching for him all the time. I’ve been searching all the time for someone I don’t know. I’m missing something, like a part of my body. All the time. Do you know what it feels like?
Ruth There was no grave, just sugar.
Hanna Sugar?
Ruth The sugar melted, it was that hot.
We ran on a street of sugar. Sugar sweet and white. There was molten sugar everywhere. On my fingers, lips, my tongue.
Hanna Just stop talking shit.
Ruth –
Hanna You ate up his photo. My dead brother’s photo. Like bread. I saw it. You think I don’t remember. But I do.
Silence
Ruth I’d like you to be happy.
Hanna Like you?
Ruth You mock me. I’d do so too, in your shoes.
Hanna I’m not mocking you.
You are just the way you are.
Ruth Just leave me alone. Spare me your questions.
Hanna I don’t want to live like this. Don’t you understand that, Mama?
We’re like birds who have cut off their own wings
Blood runs from Ruth’s nose