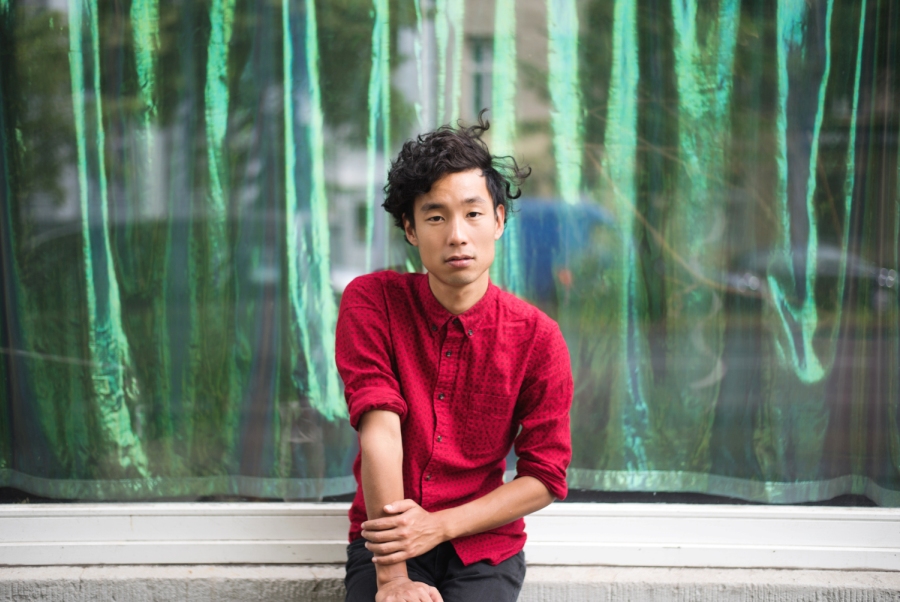 I would like to do things that rise above everything. Lower than that, I don’t want to go. Address the big issues that are everywhere in the universe all the time and in every dimension. If I don’t manage it, that’s alright too, in any case once or twice.

See below all the activities involving Bonn Park in the frame of Fabulamundi.

Born in Berlin in 1987 and raised in Berlin, Korea and Paris, Bonn Park studied Slavic languages and literature at Humboldt University Berlin from 2008 on.

His first works as a director and author were for the Berlin Volksbühne. He has been guest director at the Zurich Hochschule der Künste (ZHdK) and guest student of Werner Schroeter, Heiko Kalmbach and Frank Castorf. In 2011 he took up a course in dramatic writing at the Universität der Künste Berlin.

He received the Heidelberg Stückemarkt’s 2011 Innovation Prize for “Die Leiden des Jungen Super Mario in 2D”. His play “Traurigkeit & Melancholie oder der aller aller einsamste George aller aller Zeiten” was awarded the Else Lasker-Schüler Playwright Prize 2014 and nominated for the German Youth Theatre Prize 2016. The premiere took place in 2015 in Bonn, directed by Mina Salehpour. The audio play of the same name was produced in 2015 by Deutschlandradio Kultur. Subsequently, he received commissions from the Berlin Parkaue theatre/Theater Chemnitz and the Frankfurt Regiestudio. In 2016 he won the Essen Autorentage youth jury prize for “Wir trauern um Bonn Park”. “Das Knurren der Milchstraße” was awarded 1st prize at the Berlin Theatertreffen Stückemarkt in 2017, including a commission from the Badische Staatstheater Karlsruhe. “Das Knurren der Milchstraße” was premiered at Theater Bielefeld in September 2017, directed by Bonn Park himself.

George is a brooding, obstinate, ancient, playful and probably immortal male turtle. He yearns for the warm sandpit of his childhood, where he crawled out of his egg what feels like thousands of years ago. That’s where he wants to die at last. With a sea view. And the vague hope that in all the centuries he has chalked up, it was not all humbug and claptrap. In his memories, he no longer differentiates much between the wars he experienced in Troy and Persia and the uproar that came after. His lovers seemed to blend into one, after one romantic trajectory much like the next. He lost touch with his offspring. To escape his all-encompassing solitude, George invents recipes enriched with himself. He becomes the hero of his nightmares and the impetus for his visits to the doctor. George is there when Rapunzel climbs out of the hairy fairytale tower and into the desert. He smiles with his turtle mouth and carries a cosmically accrued sack full of merry depressions, on and on.

The universe rumbles, the earth vibrates, and nobody takes off. The post-migrant dramatist Bonn Park has changed his line of work and is now a post-migrant speech-writer. He dictates words into the mouths of people from a near and improbable future. That’s why this text undoubtedly belongs to the genre of science fiction! The people here are hopeless, sometimes even mean and nasty, but they try to do things, great things, out of sheer naiveté, pleasantly stupidly, to usher in a time when nobody does things anymore, especially not the talented and privileged, who at some point are eaten up by foam and the internet. A subversively epochal and perversely dumb text without age restrictions but only for people who are prepared to confront the world’s overload and who can stop selling their grandmothers.

Die Leiden Des Jungen SuperMario in2D (Sorrows of young SuperMario in2D)
A famous video game hero tortured by Franchise and Merchandise of kart games has to repeat again and again the same old story. He has to free the princess with a very little reward and going on in an experience without sense. Therefore he has to bump his head against stones again and again for a coin here and there for which are so worthless he can’t buy himself a drink, a house or some fun. He has to jump on turtles and squeeze them out of their shells brutally and no one asks him why he hates turtles so much (probably he doesn’t at all). In the end, he will find no answer and yet he might be a little more satisfied. “Die Leiden Des Jungen SuperMario in2D” is Bonn Park’s first play and he does all the sins and errors you do when you write for the first time. It is for sure far away from being the best play in the world but it is very close to being a very typical first one.

Traurigkeit&Melancholie oder der aller aller einsamste George aller aller Zeiten
(Sadness&Melancholy or the most lonesome George of very all times)
There was this Galapagos turtle called lonesome George. He was the last of his kind. He has nothing more to do. Not biologically because there is no one to reproduce nor politically or whatever. This play is about time, world, hot topics, love, hate, tears, everything. Only 2 weeks after starting writing this play, in real life lonesome George died.

An author died. Some people are sad. This play is about the almighty force: Dying! And it’s very short.