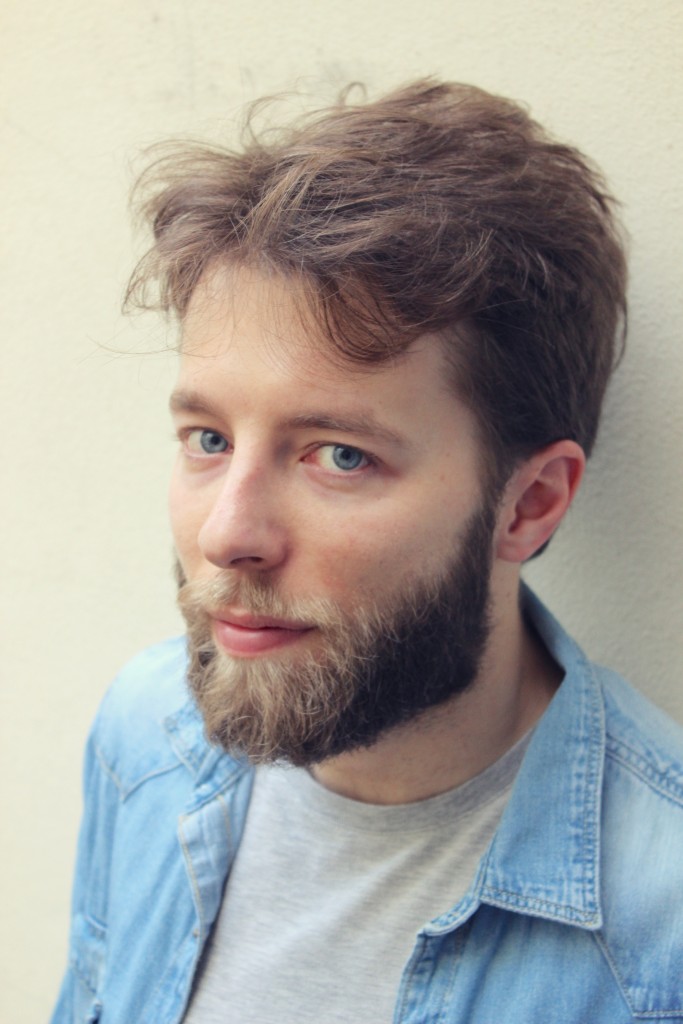 I like to write about subjects on which I have different and irreconcilable points of view. I use writing for investigate myself and in this way I hope to be able to investigate the audience too. I write plays that, through strange and unpredictable events, try to open vertical questions about love, life and relationships between people, like “Homicide House” and “Farfalle”; I also write plays strictly connected with contemporary European issues, like “Scusate se non siamo morti in mare” and “Allarmi!”.

See below all the activities involving Emanuele Aldrovandi in the frame of Fabulamundi.

Emanuele Aldrovandi (Reggio Emilia, 1985) is a playwright, screenwriter, translator and director. Graduated in Philosophy in Parma and in Literature in Bologna, he graduated from Civica Scuola Paolo Grassi in Milan.
In 2013 with Homicide House he won the most important Italian recognition for new dramaturgy, the Riccione “Pier Vittorio Tondelli” Award, and his texts began to be staged by various companies in the main Italian theaters.
In the following years he also won the Luigi Pirandello National Prize, the Hystrio Prize, the Fersen Prize and the Mario Fratti Award, and was a finalist for the Testori Prize, the Scenario Prize, the In-Box Prize and again for the Riccione Prize twice.
He is the founder and artistic director of the Associazione Teatrale Autori Vivi, works with Elfo Puccini Theater in Milan, with national theaters such as ERT – Emilia Romagna Teatro and Teatro Stabile in Turin and with independent companies such as MaMiMò and ATIR. He collaborates on international projects with the Peking Opera, LAC of Lugano and The Tank Theater of New York, he is one of the authors selected by the Fabulamundi Playwriting Europe program and his texts are translated, staged and published in English, German, French, Spanish, Polish, Slovenian, Czech, Catalan and Arabic.
He also deals with site-specific events and museum installations, such as writing texts for the “Open Air Museums” event during EXPO 2015 or curating the “Rossini Experience” exhibition at the Pesaro Civic Museums in 2018. He teaches theatre writing at Civica Scuola Paolo Grassi in Milan and leads various workshops in Italy and abroad.
In 2018 he also began working as a screenwriter and film director. In 2019 his second short film, Un tipico nome da bambino povero, was presented in competition at the Giffoni Film Festival and subsequently participated in numerous national and international festivals, obtaining various awards including the Unicef ​​Award. In 2020, his third short film, Bataclan, is presented in competition at “Alice nella città” at the Rome Film Fest, where he wins the special Rai Cinema award.

ALARMS!
Characters: 15, with a minimum of 5 actors (4 men, 1 woman) – available in Italian and English
A terrorist group is planning an attack: they want to kill the president of the European Union, live stream the whole thing, and start a revolution. They’re extreme right terrorists, they don’t believe in democracy, they hate immigrants and they want to establish a new dictatorship in Europe. Their leader is Victoria, a charismatic and determined girl who claims to be able to guide the masses and change the course of history. The play draws inspiration from the growing influence of extreme right political parties in Europe, and it develops into an exploration of the thin, subjective line that separates revolutionary heroes from mythomaniacs. The story of the attempted revolution is interspersed with conceptual interludes where, for example, Democracy converses with a Point of View, and Herostratus is questioned by a psychologist.  In the preface to the play, published in Italy by CUE Press, Carmelo Rifici writes that “we should coin a new phrase to define Aldrovandi’s writing. His theater seems inspired by situations common to Beckett and Ionesco, and describes types that evoke certain plays by Canetti, but Emanuele’s characters – their neuroses, their viciousness – are so recognizable and real that I’m tempted to speak of a drama of reasonable paradox: a reality that is so paradoxical that it becomes entirely plausible, yet without being naturalistic.”

SORRY WE DIDN’T DIE AT SEA
Characters: 3 men, 1 woman – available in Italian, soon in English
In a not-too-distant future, Europe has become a continent of emigrants. European citizens, in a quest to find better jobs and a better future, try to reach the “richer” countries, but they have to do so illegally because those countries have since closed their borders. Among many ways of migrating illegally, one of the most widely used is the shipping container: the illegal immigrants come on board and pay a thousand dollars on departure and a thousand dollars on arrival, without knowing where they’ll be offloaded. The characters in this dystopian story are four, and they have no names. They’re identified solely by their physical traits: Robust, Beauty, Tall are the three migrants and Soft is the owner of the container. The play is divided in four parts. The first one takes place at the harbour, before the journey, the second one inside the container, the third one in the middle of the sea after the shipwreck of the boat they were traveling on and the fourth is a dreamlike epilogue – or perhaps a hallucination: the arrival of whales. As Davide Carnevali writes in the preface to the Italian version published by CUE press, the play’s strength is that it doesn’t act as “a parasite to reality, exploiting the problem of immigration and its media coverage. On the contrary, it’s a play that wants to say something that the media doesn’t regarding this problem; to show an image of this reality that isn’t generally shown; to clearly illustrate its dynamics and its motives. This is how theater reaffirms its meaning, a profound one: that of reopening the dialogue with society, where the media often close it.”

FARFALLE (Butterflies)
Two sisters, a blonde and a brunette. Their mother killed herself when they were young; their father abandoned them and fled to Brazil with another woman. Living alone together since they were small, each being the entire family of the other, they invented a curious game to pass the time.
Their father returned when they turned twenty-one, announcing that he was no longer required to pay the rent on their apartment while proposing a way for them to avoid homelessness: the arrangement of marriages with two loathsome but extremely wealthy forty-year men.
The blonde accepts but her sister refuses, and consequentially the two separate for the first time in their lives.
The play’s three acts represent three key moments of their lives and present a story of personal growth and sisterly love in which the discovery of oneself does not necessarily coincide with the comprehension of the other.

HOMICIDE HOUSE
With his small business on the verge of bankruptcy, a man is suddenly asked to repay all his debts at once. Lacking the funds necessary, fearing for the safety of his wife and children, he accepts to enter a place in which “complementary needs as yet not filled by the market may be traded in exchange”: those who feel the need to kill can pay a victim for the privilege; victims ready to die may receive funds to be left to their families.
This text won the most important award for new Italian drama, the Pier Vittorio Tondelli” Riccione Prize with the following motivation: “Innocent yet sinister parable on the blurred line between the false and the true, an introspective text with an ironic-fairy tale turn (a macabre fable with no happy ending), Homicide House is a courageous attempt at ‘vertical’ dramaturgy with a theoretical/conceptual framework that enacts a ‘soft’ circumvention of tragedy. If the dilemma the story revolves around prosaic normality (in short: can lies be used for the purpose of good, or at most, the lesser evil?), the characters show themselves capable of representing philosophies with determined poetics in addition to being real people: it is no coincidence that the man who hides his weakness for indebtedness from the woman he loves purely for the pleasure of doing so must conduct his shady business transactions with sordid figures like Dotted Shirt and Stiletto Heels, managing to save his skin without any real force but instead the timely use of the word. Homicide House is a mechanism of psychological aggression that wounds and slays by reasoning in place of weapons of torture. An original idea at the heart of the text and a lively use of common language in the alternation of both isolated and action advancing monologues with electrifying dialogues make the text a successful and promising experiment.”


IL PRESIDENTE (The president)
The elegant dinners and parties regularly held at the President’s villa are enlivened by swarms of attractive young girls ready to offer themselves in exchange for money and work in show business. Minnie looks like the others, but she’s actually a freelance journalist with more than just a scoop in mind: she hopes to assassinate the president. She finally gets her turn alone with him behind closed doors at the villa, but the game of mock seduction she begins takes a surprising turn.
“Inspired” by certain events involving former Italian Prime Minister Silvio Berlusconi (whom the protagonist explicitly resembles), the text offers paradoxical reflections on the nature of power, its holder, and those who come up against it.