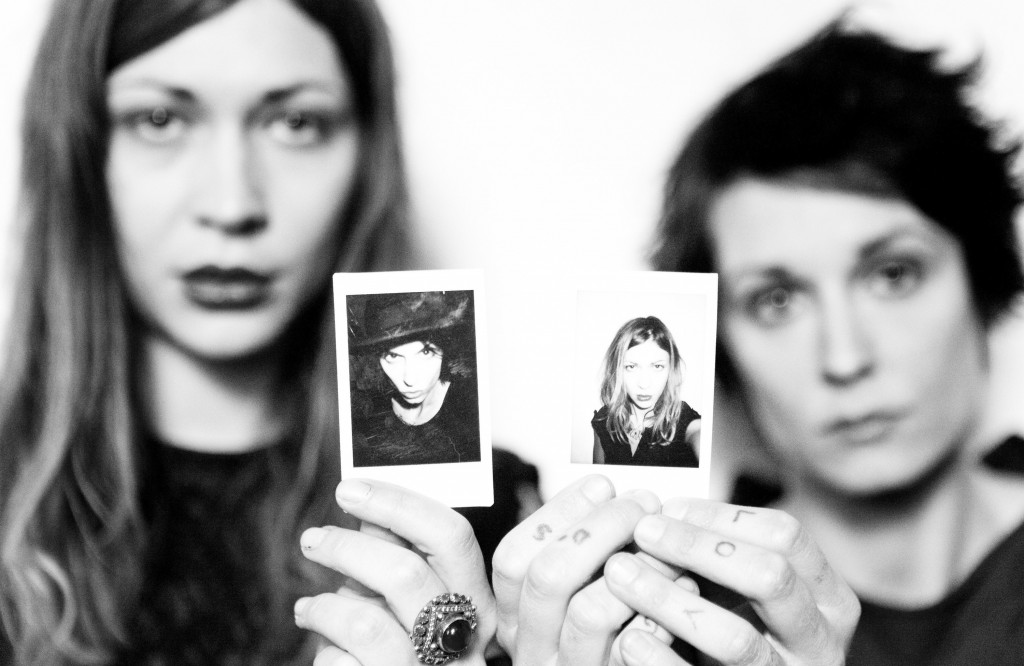 In recent years, our research has recognized drama as a dense and stratified instrument to re-establish reality through the use of language and to highlight or investigate a specific theme. Philological and philosophical research helps us rediscover the possibilities of representation, which we question each time: through the use of bodies, images and words we intend to rewrite, together with the spectator,  something dissimilar to the starting point. For us, it is as if there was a return of multiple levels of gaze and it is in this chain of looks that new forms of understanding, knowledge and displacement can take place. In practice, let’s start with this desire: to put our eyes in front of other eyes for a while in order to be able to look together again.

See below all the activities involving Industria Indipendente in the frame of Fabulamundi.

Born in 1983 and 1986 Erika Z. Galli and Martina Ruggeri started up their creative partnership in 2005 by establishing Industria Indipendente, a performative, theatrical and visual arts cooperative. Their artistic research began in 2005 with some video and performance experimental works and continued with their original writing and dramatization. Since 2005 they have been realizing video and performance works in both city-centre and country locations, working together with performers of various kind of training and different ways of working, from music to fashion, from dance to fine arts. In 2009 they began their research on drama and theatre and in 2011 made their debut with Crepacuore that received numerous prizes at many national festivals. The same year they founded their own company Industria Indipendente, which is still operating in Rome. In 2014 they performed È tutta colpa delle madri at Teatro Valle and their script Supernova won the Histryo Prize for Theatre Writing. In 2015 the two made an appearance at the Trasparenze Festival in Modena with the show I ragazzi del Cavalcavia, winner of  the Critics prize Dante Cappelletti. They reached the final stage of the Scenario Prize with Ho tanti affanni in petto, a work based on the Iliad. Since 2014 they have been part of the group Le ragazze del porno and since 2015 they have been part of the Fabulamundi playwriting Europe project. In February 2016 they were selected as resident artists by the Italian Cultural Institute of Paris where they wrote the text Lullaby, performed in the same year in the form of mise en espace (Theatre Ouvert, Paris) in collaboration with the project Face to Face and the Maison Antoine Vitez. Since 2015 they have been collaborating, as playwrights, with the directors Daniele Spanò and Luca Brinchi (First text: Aminta, by Torquato Tasso, 2016). They debuted with a new work Lucifer at Tramedautore Festival (Piccolo Teatro, Milano) and at Romaeuropa Festival in September-October 2017. Their texts were published from Cue Press publishing house (Rosso rosa, Ferracchiati- Galli- Ruggeri). Supernova, as a mise en èspace, was performed in French language at Théâtre Garonne (Toulouse) and at Festival Actoral (Marseille).

LULLABY
Characters: 2 men, 2 women –available in Italian
We are in 2056, in a world that perhaps has no boundaries. There have been traumatic events of great historical importance that led to the formation of the United States of Europe.
Over the years, young people have managed to climb to the highest points of the social pyramid, increasing productivity through the exaltation of athleticism, vigour, and speed. The majority of world states have adopted a new style of politics, re-writing constitutions and enacting numerous laws.
One notable law is enacted to solve the problems of retirement and bring dignity to the lives of senior citizens; under this law, upon reaching the age of 70, a citizen is brought to one of the thousands of Lullaby centres where they live spend the remainig years of their lives. Any belongings are passed to their children or closest heirs. There are numerous centres in every city. In every part of the world. The Lullaby centre offers residents everything they need: private rooms, great meals in the in-house restaurant, a pool, a park, and various recreational activities. It is on this occasion that the 4 characters unite with the intention of planning a conspiracy.
A conspiracy prepared to kill the President of the United States of Europe, who will be visiting the centre a few hours later. They want to try to return balance to society or perhaps, more simply, to their own lives. The unreal world they are forced to live in is an oasis of well being, a little paradise on Earth, where perhaps every young man would dream of living in the autumn of their lives.
A cage, albeit gilded, induces a lack of freedom. An obligation, like any obligation, eventually tires. It can make you restless, subversive, even revolutionary.

SUPERNOVA
Characters: 6 women – available in Italian and French
A mother, five daughters, a mountain in front of their lives.
A pink mountain, a female mountain.
The heterozygous twins Antonia and Aida, and their sisters Adele, Angelica and Anita prepare themselves every year to celebrate the Spring Festival: they try to take pictures, to make themselves beautiful, to be happy again, but something has changed irreparably.
The light has gone out, everything has become darker.
The father disappeared in the heart of the mountain and the mother stopped being a mother, held a rifle to defend herself, and became deaf.
The short-circuit occurred, a tree spilt and the brilliant and powerful supernova that used to colour the lives of the young women became a black hole. And while the mountain is shocking pink dyed, everything is arranged and the girls get ready for the dances. An hour or so before the start of the evening that they have been waiting for so long. An hour of their lives.
Supernova is a family portrait that lets you imagine that, year after year, someone will be missed: lives with erased faces, wandering presences asphyxiated by a tropical climate on the mountains, ghosts that one by one will disappear without leaving any traces.
Supernova is the explosion of a star, is the light in the eyes, is the power of heaven, is the cruelty of nature.

I RAGAZZI DEL CAVALCAVIA (The Lads of the Overpass)
Five men, one family: the F. family. The F. family consists of four brothers and an uncle by marriage: ordinary lads with a job and a town on their heels, the town of T.
Shifting between dullness and self-affirmation, the F. brothers’ and uncle Tex’s lives experience both excesses and awareness in carrying out what appears to be predestined.
The story draws upon real events occurred in December 1996, when the Furlan brothers, in an attempt to escape boredom, threw a 3 kg stone from atop of the Cavallosa Overpass (in Tortona, Province of Alessandria) and hit a woman in a car driving by.
This play is set in the Nineties, the years that represent a moment of great transition and confusion. With the new century close at hand, the decade preceding it is remembered as a bunch of years with no definite identity and with dazzling colours, and yet these years constitute a black hole, a tunnel that leads into fear. It is the fear of what is next, if something will ever be there. Fear of change, of uncertainty and of the future. Four years to the year 2000, the millennium of extinction and desire, the millennium that is feared by merely being mentioned.

LOVE
Love is a story of love and loneliness. A woman, a rock star, a body full of hate, a hate comparable to love.
In this concert for one voice, the star relives the rise and the fall and sticks to her only desire, her only true love: having hundreds, thousands of people ready to do just about anything to watch her cross the stage.
But nothing helps when directions are screamed at you from the outside: be inside it!, be above it!, on and on and forever.
Love was the daughter of acid before becoming the wife of a legend and the alleged murderer of her greatest love. As every other tragic hero, she is alone. Alone before the truth. As every other rock star, she screams at her loneliness, waffling in front of strangers who would rather have her take up the guitar and sing. A woman who is at the centre of the world, who struggles in the face of time passing with ever deeper wrinkles and fading memories. Love becomes history, she exists and resists herself rather than a society or a system that would have her dead – because a dead rock star is worth much more money than a living one.