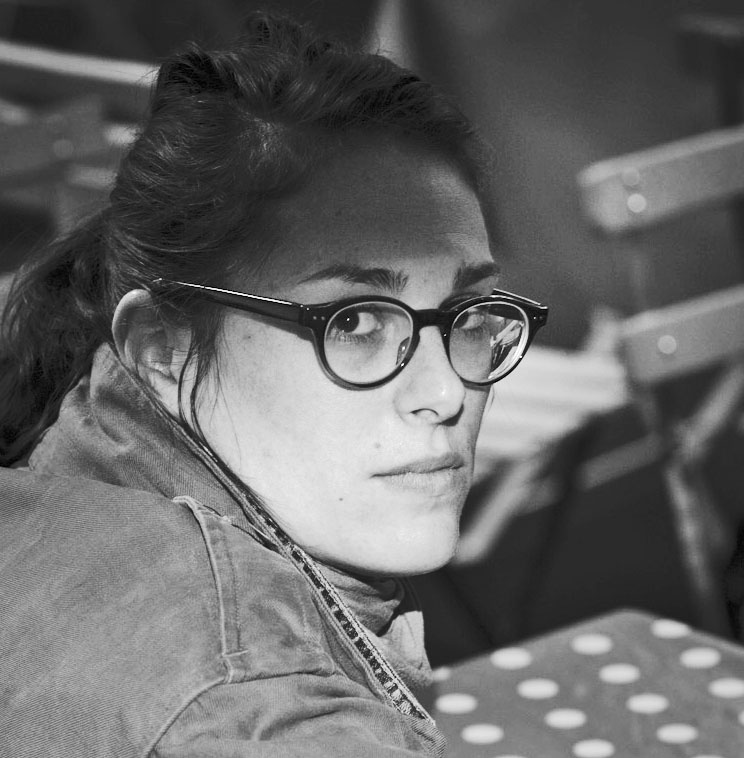 See below all the activities involving Magali Mougel in the frame of Fabulamundi.

After being a professor at the Université de Strasbourg and a copywriter at the Théâtre national de Strasbourg, Magali Mougel has been writing for the theatre since 2014 and regularly accompanies young authors and playwrights at the Institut littéraire de Bern (Switzerland) as well as at the ENSATT where she studied between 2008 and 2011.

Because she is convinced that the place of the playwright is, above all else, in the theatre, as part of the creation process, surrounded by other artists to write, she has collaborated with a number of companies and theatres since 2011, and has often worked under commission. She wrote, among others, Elle pas princesse lui pas héros for Johanny Bert (CDN de Montluçon-Festival Odyssées en Yvelines) in 2015-2016, Poudre Noire for Simon Delattre (Rodeo Théâtre), Je ne veux plus for Olivier Letellier (Théâtre du Phare) and Cœur d’acier for Baptiste Guiton (Théâtre Exalté).

Since 2015, she has oppened up to new areas of collaboration, first as artistic collaborator for Compagnie EXIT with director Hélène Soulié, then experimentaing with poetry and plasticities alongside mask sculptor Étienne Champion and director Catherine Javaloyès (Compagnie Talon Rouge), with choreographer Aurélie Gandit (Compagnie La brèche), and she continues her collaboration with Baptiste Guiton on the air at France Culture radio with the project Le bruit des taupes.

In 2017-2018, she became associate playwright at the Scènes du Jura and  joined the artistic collective at the Théâtre de Sartouville – Centre dramatique national.

THE LULU PROJEKT
Lulu is not like other teens, probably because he lives on the other side of a wall, in a tower surrounded by fields, with his mother who has trouble accepting him as he is and who idolizes his sister. Lulu’s dream? To become a rock or punk star, or be like Valentina Terechkova and conquer space and stars. But Lulu needs to take school exams that will determine his future. And the future offered doesn’t inspire him at all! With Moritz, his visually impaired friend, Lulu escapes into dreams populated by benevolent aliens; dreams where it would be possible to start over. The two friends remake the world, proportionate to their imagination and to the blindness that slowly takes over Moritz, when an improbable young woman appears suddenly, as though she fell down from the sky. Magali Mougel creates the portrait of an adolescent who, in his own way, defies social norms and the imposed conventional order in a headlong rush towards emancipation and freedom.

PENTHY ON THE STRAND
This is the kind of story people tell at parties when someone has had too much to drink and everything gets out of hand. Boys and girls would be wearing old-fashioned clothes, from another time. Sublime music would be heard in the background, Blasmüsik perhaps, for brass band music does border on the sublime.
It would be summertime.
The party would take place somewhere in the middle of nowhere, as parties usually do.
But that’s not what’s going to happen. The only thing left would be the remains of a once-upon-a-time party that will never take place again. A party disrupted, shattered by flying baseball bats, heads smashed and a face, suddenly appearing. You recognize your brother, you recognize your son, you recognize your lover. But meanwhile, elsewhere, a man is being hunted down by villagers, an Amazon sees her breast pierced by her enemy’s spear, a teenage girl is drinking beer in a basement while another girl is reading Alain Badiou’s Ethics for the first time : these are the ruins on which the chorus needs to stand to this story.

Erwin Motor (Erwin Motors, devotion)
Erwin Motor is a small company in car subcontracting. Cécile Volanges, is one of the employees working on night shifts on an assembly line. She is a young and model working girl whose dedication to her job, and pride, is misunderstood by her husband. Mr Talzberg is the one in charge of overseeing the way tasks are done in a proper way in that firm. Yet, he is watching particularly the female workers in a way one could consider as too close, with his own means and manners. As Mrs Merteuil, Erwin Motor’s manager, threats the employees with the perspective of a delocalization of the company, the question of how to find the reason of the decrease of the production figures emerges. Where to find the culprit ? Or more accurate, the female worker responsible for that. Then, Cécile finds herself trapped in the middle of a tightening noose, as a new version of “Dangerous Liaisons” taking place at work.

Suzy Storck (Suzy Storck)
Suzy Storck lives an ordinary life with husband and kids in a small house of their own. She doesn’t work anymore to look after the youngest, doing the washing and being a perfect housewife. One summer night though, something goes wrong. Suzy goes beyond her own limits, forced in a way by the accumulation of same routines and the heat of the passing days. A tiny and short step aside, which drives her to think about all her life up to now, getting the feeling of not being able to live her own life with her own desires. She then gives way to her emotions and to what is understated by that. Suzy Storck gives a new approach to the life of a woman not considered as a human being, brought by a disrupted chronological writing pattern, a life which has to end in a most inhuman way.

The Lulu Projekt
Lulu is not like other teenagers. Maybe because of the place he is living in, somewhere in the East, somewhere on the other side of the wall, in a decayed building, right in the middle of the fields. His dream ? To become a rock or punk star, or being like Valentina Terechkova : going far away to the conquest of space and stars. Yet, things will not go this way. Lulu fails to pass the exams which could lead him to the professional future he dreams about. He is instead admitted in a special section for handicapped persons, in a firm, then working for a landscape gardener. Lulu is then the one who disappoints, especially his mum who can’t accept the fact that he is not succeeding. As a way of trying to escape the world of work, Lulu meets a young boy, partially sighted, whose name is Moritz. Together, with the help of their fertile imaginations and aliens, they build up a new world of fantasy where they could start all over from the beginning. At the very moment all is about to go up in smoke, Lulu’s meeting with a young girl, as if fallen from heaven to the earth, is going to lead him to look forward a new horizon.