My texts are a mixture of humour, violence and tenderness.
I aim to be equidistant, in this sense.
I practice drama, black comedy, vaudeville and the absurd.
But if I have to put a label on my writing, I would say that, in general,
I write light tragedies.
In this case, I circumscribe
the word “tragedy” to the characters.
Fate always passes over them,
and although they fight hard against it,
they always end up being crushed
by the inertia that drags them along.

See below all the activities involving Pau Miró in the frame of Fabulamundi.

Actor, playwright, and director. He holds a degree in Acting from the Institut del Teatre de Barcelona (1998). He trained as a playwright at different seminars at the Sala Beckett taught by Carles Batlle, Sergi Belbel, Xavier Albertí, José Sanchis Sinisterra and Javier Daulte, among others. In the field of playwriting and directing, his latest plays are Terra Baixa, performed by Lluís Homar (premiere in November 2014 at the Temporada Alta Festival) and Dones com jo (premiere in January 2014 at the Teatre Romea). He is also the author of Adiós a la infancia (a dramatic production based on the main novels of Juan Marsé, directed by Oriol Broggi. Teatre Lliure, 2013) and The Players, which he also directs (Festival Temporada Alta, 2011, and Teatre Lliure, 2012). This text won the Butaca Prize for the Best Text 2012 and has been translated into Italian, English, Greek and Spanish. Furthermore, in Italy it was premiered to a great acclaim from both critics and audience at the Teatro Piccolo in Milan in 2013 and it won Italy’s prestigious Ubú Prize as the best new foreign text. During the 2008-2009 season, he premiered The Animal Trilogy, of which he is author and director and for which he received the Barcelona Theatre Critics’ Prize for the best text. In 2004, he premiered It’s Raining in Barcelona at the Sala Beckett, under the direction of Toni Casares, a play which was translated into nine languages with different productions around the world (Italy, Portugal, United Kingdom, Canada, etc.)

The Players
In an old flat, around a table, under a lamp, four men (a barber, a gravedigger, an actor and a mathematics teacher) play a game of cards. This flat is a refuge where all failures are accepted, permitted. Failure is the rule, rather than the exception. The money has all disappeared, along with any possibility for personal success. About to touch rock bottom, the four characters will decide it’s time to take a risk. And at that moment, the game becomes a dangerous one.

Buffalos
A tale of five siblings who live and work in a launderette in a tough neighbourhood. When they were young children, a brother of theirs disappeared. Their father told them that a lion had taken him and he would never return… The father, the mother, the siblings, they have all been trying to cope with this for a long time, but it’s never easy… Finally, the mother cannot cope anymore and disappears, is eaten by a lion, or whatever. The father, who had coped with everything up to this point, one day cannot take any more and also disappears. It’s all the lions’ fault, the siblings say. Together they will try to keep going.

It’s Raining in Barcelona
A prostitute who reads Dante and looks for customers in museums. A pimp who eats hamburgers and chocolates all day long. A client who wishes for the death of his wife every night.
In port cities, impoverished communities often live alongside the city’s places for official culture. It’s Raining in Barcelona, a story of a dark and fragile triangle formed by three characters (a prostitute, her pimp and one of her regulars), has as a backdrop this peculiar proximity between the hidden city, globalising consumerism and the world of high culture, so typical of Barcelona’s Raval area. 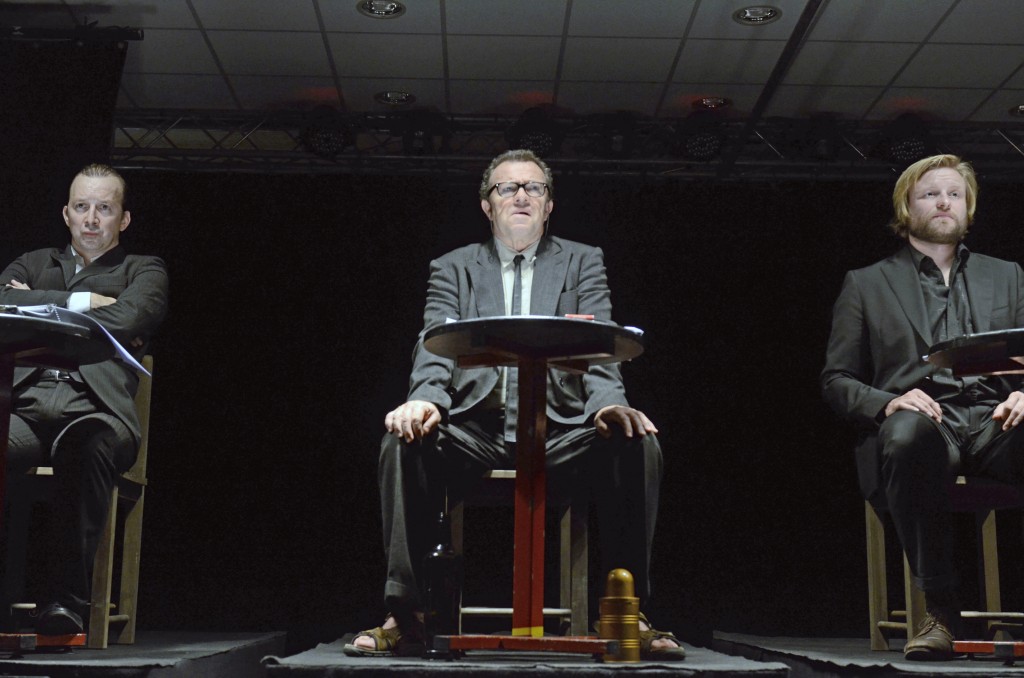