PLAYGROUND London is a format of Research & Development workshops online designed by PAV/Fabulamundi Playwriting Europe and supported by the Italian Cultural Institute of London with the aim of promoting and supporting new and emerging Italian playwrights.

The main focus of the project is to both interrogate the script and characters as they appear on the page and to discuss the wider issues of translation and adaptation from one context into another, in order to explore the opportunities and challenges of translation across languages and cultures. In the same way, active dialogue with the translators, in addition to bringing further feedback, also contributes to the promotion of texts in the production industry.

PLAYGROUND was born thanks to the extensive and long-lasting experience of Fabulamundi Playwriting Europe, the cooperation project for the promotion of the contemporary dramaturgy that, since 2012, has been building bridges and relationships among the 18 European countries of its network. The strong and structured action of Fabulamundi, a Creative Europe-funded project, has given PAV the possibility to set up a privileged observatory on the European theatre sector, mapping/detecting weakness, gaps, underrepresented contexts, gender inequalities in order to promote a diverse, equal, gender-balanced, sustainable ecosystem for creativity. 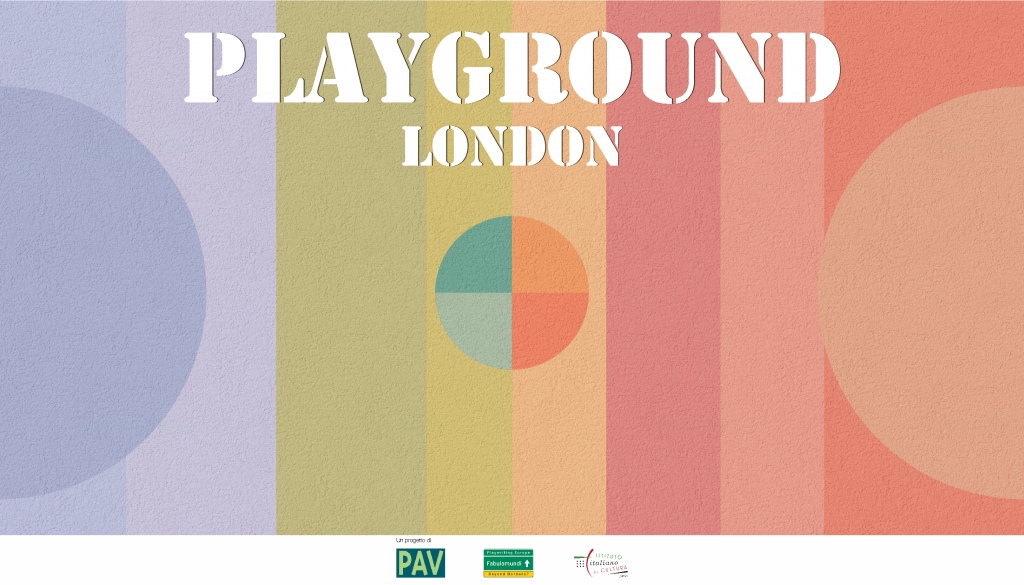 PLAYGROUND - London Research and development workshops 18-22 July | 19-23 September | 10-14 October Online on Zoom From the renewed synergy between PAV / Fabulamundi Playwriting Europe and the Italian Cultural Institute in London, comes back the text-development workshops of PLAYGROUND London. From July to October, three online sessions will focus on new [...]

FABULAMUNDI PLAYGROUND - London Research & Development workshops  November, 8th - 12th online on Zoom PLAYGROUND is a format of R&D workshops supported by the Italian Cultural Institute of London and the international network of Fabulamundi Playwriting Europe aimed at promoting and supporting new and emerging Italian playwrights by offering the opportunity to translate their [...]

FABULAMUNDI PLAYGROUND - London Research & Development workshops  June, 21st - 25th / June, 28th - July, 2nd / November, 8th - 12th online on Zoom Crossing the writings, putting them on the field, catching the breath and rhythm of the lines when the voice of a performer shapes a body for them. With Fabulamundi PLAYGROUND, PAV puts [...]