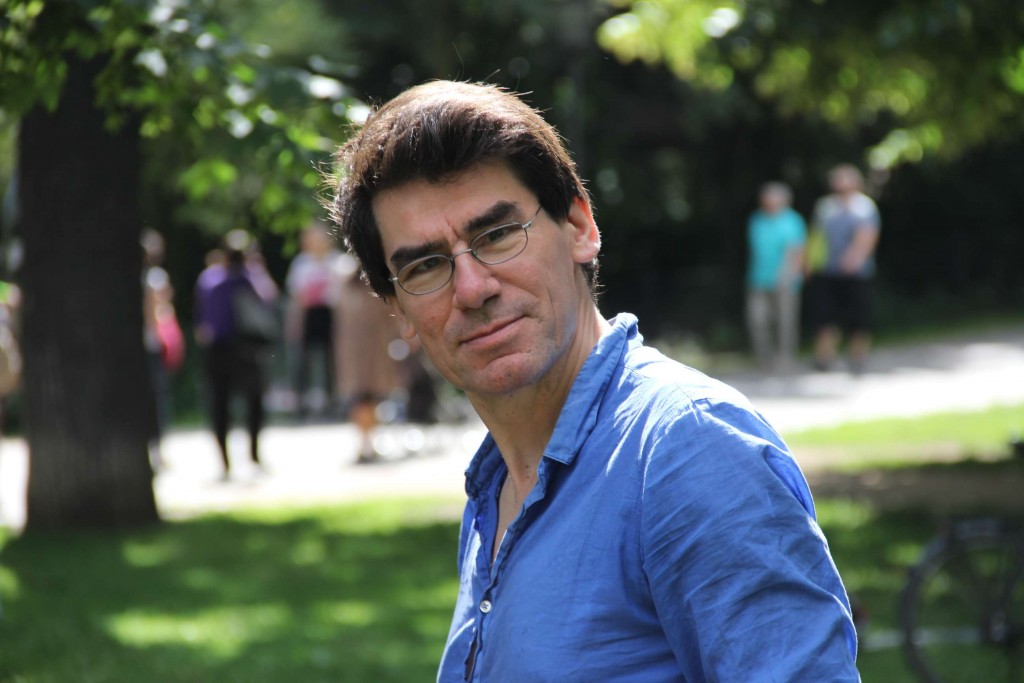 I try not to block any ideas, when I write them down. I only ask them about their necessity, before I give them space. Many of my scenes have a deadly comical crazyness. There is a horror insidthat provokes laughter. My main  characters often reject normality or look for normality. Odd fishes that dream about swimming. They are not from this world but nevertheless fight for a place or at least for orientation. Nothing is sure to them. Even not they themselves. These heroes are not „lost“, because being lost means that you have some time been not lost. They are „postlost“. Often I find something magical in my scenes, fabulous transformations. This is what interests me most in my work.

Rolf Kemnitzer was born 1964 and is living in Berlin. After his education as theatre-director he worked in several german theatres, in
off-groups in Berlin and as theatre pedagogue. Engagements as director, author and actor at several german state-theatres and off-groups.
He got several grants for his theatre plays and published in the “Verlag der Autoren”
1998    „Die Herzschrittmacherin“
2000   „Die Bauchgeburt“
2002   „Der Waschboy“
2008   „Magdalenas Engel“
2012    „John Player Sampling Eichendorff“ among others.
2012 he founded an intercultural theatre center in Berlin/Neukölln.

Das Geschrei der Gartenzwerge im Traum (The screaming of the garden gnomes in the dream)
This is a play about an encounter with the powers of childhood. The presumed dead leader of a youth-gang reappears after ten years. The five other ex-gang-members gained ground in life, became “serious” grown-ups, tried to forget about his sudden disappearance, his possible death and already laugh about their past as youngsters. But the reunion brings them back into a magic world of danger, rituals, intransigence and unconditional dedication to what they did. They all come back into that world. Unexplicable things happen, a speaking dog metamorphoses… A modern summer nights dream takes its course.

Die Herzschrittmacherin (Heart pacemaker)
On behalf of his mother a young man from Berlin visits his grandmother to tell her about an imminent incapacitation. Becoming old her behavior developed more and more aggressive and anti-social. The unequal couple is getting slowly in touch with each other and the obstinate old woman keeps her will-less grandson at her place. The visitor is fascinated about his powerful granny, who is an example how to cope with difficult situations in life and somehow she brings him more to himself. She teaches him how to steal, but when she is tries to rob a bank with him, he runs away. Some time later he comes back (for real or as her dream) and takes her grandma with him to Berlin.

John Player Sampling Eichendorff
John Player, a young man from a wealthy family is leaving the house of his parents and comes to Berlin. In a slum area he is being robbed and got a knife in his head. When a woman tries to help him he begins to speak in a strange language – he opens his heart in the idiom oft the german romantics oft the 19.century. He is not only speaking their language, but also seems to have forgotten everything. With the conciousness of a second Eichendorff he tries to understand our time and to make a living. As he fell in love with the woman who gave him first aid, he is looking in the whole town for her. Instead of finding the beloved lady John Player is being put into a mental hospital. In the meantime his father is tracking him and finds the woman of his sons heart. Then the father tries to arrange a meeting between her and his lost son, in ordert to give him some sex-experience wich might make him normal again. John Player begins a love-affair. Against the will oft he rich father this affair becomes serious. The romantic outsider wants tob e part oft he society: he gets married and takes up an employment. His father visits him and tries to take him back home…