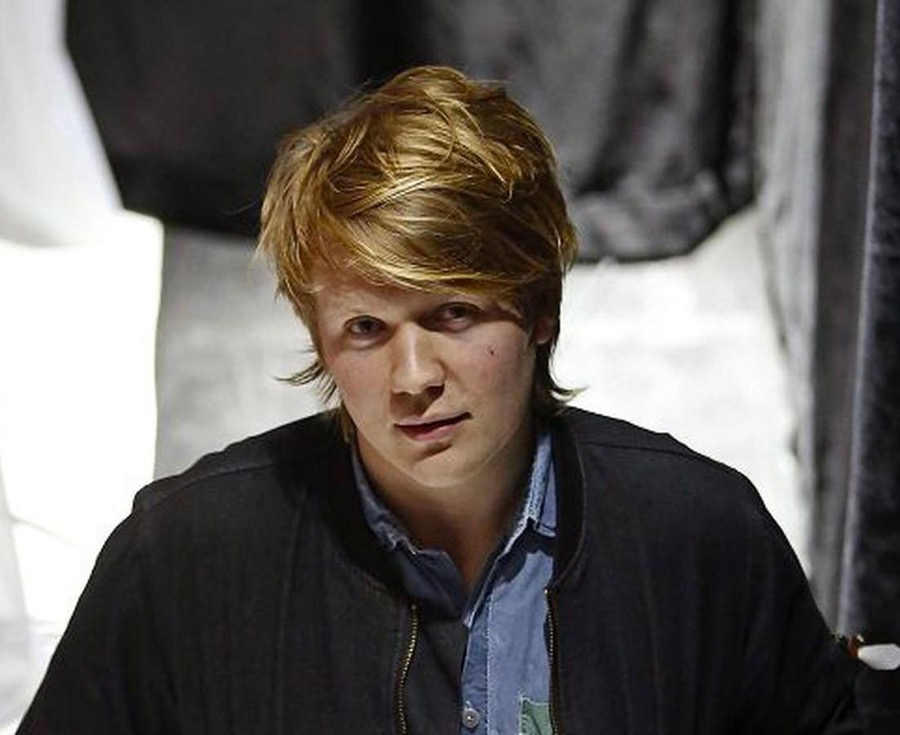 Tyrfingur Tyrfingsson was born in 1987 and grew up in the small town of Kópavogur Iceland. He finished a BA in performance making at The Iceland Academy of the Arts in 2011. He was an exchange student at Janáček Academy of Music and Performing Arts in The Czech Republic and then went on to study Writing for Performance at Goldsmiths, University of London.

Tyrfingur Tyrfingsson’s first play Grande was his graduation piece from the Art Academy, earned him recognition in Reykjavík and a nomination to Gríman, the Icelandic Theatre Award. Two years later Blue Eyes (Bláskjár) premiered at the Reykjavík City Theatre where Tyrfingur was made resident playwright. There he wrote The Commercial of the Year.

His latest play The Potato Eaters received five star reviews, critic Jakob S. Jónsson naming Tyrfingur as one of Iceland’s preeminent playwrights. The Potato Eaters is set to be premiered in The Netherlands with Marcus Azzini directing his theatre group Toneelgroep Oostpool.

Blue Eyes was given a staged reading at the Avignon festival in July 2018 during a European forum dedicated to contemporary writings organised by the Avignon Festival, the Strasbourg National Theatre, The Nanterre University and de Maison Antoine Vitez.

Tyrfingur has received six Gríma nominations and won the award once. His plays have been published in books and translated into En- glish, French, Dutch and German. He has written for Glamour Magazine Iceland and taught at both The Iceland Academy of the Arts and the University of Iceland.

In the fall of 2018 The Potato Eaters were nominated for the Cultural Awards (Menningarverðlaun DV). Tyrfingur Tyrfingsson lives in Amsterdam.

Lísa is a war nurse and renowned for her work in the Yugoslav wars and her attribution to the feminist movement. We meet Lísa as her estranged daugther, Brúna a busdriver, asks her to babysit for the first time. As Lísa is trying to connect with her peculiar grandson, she hears a knock on the door. Outside Mikael, her former step-son and lover, is standing and in desperate need of help.

A dramedy about the selfishness of suffering, codependency and how trauma travels within the family and isn’t stopped until it is seen.

Helgi Comes Apart is a play about a couple of swindlers (a father and son) in the funeral business in the town of Kópavogur and how one day a Greek tragedy starts happening to them.

The father of Helgi, Jón, has an epiphany – three terrible things are about to happen to Helgi. Jón feels that Helgi owes it to him that he listen. But instead of obeying and going into hiding like Jón suggests, Helgi decides to show himself to the world and sing at one of the funerals they are undertaking. And Helgi’s life opens up, he fucks people, manipulates them, falls in love and seems to be getting closer to his core, seems to be exiting the narrative when one of the three terrible things predicted comes true …

Since I was born, it has been predicted the following will end the world: The Cold war, the hole in the ozone layer, the Y2K, terrorism, the financial crisis, global warming and Coronavirus. But when Helgi tries not to believe in his father’s predictions, his world really starts coming to an end.

Helgi Comes Apart is about one con man’s desperate try to separate himself the predictions of others.