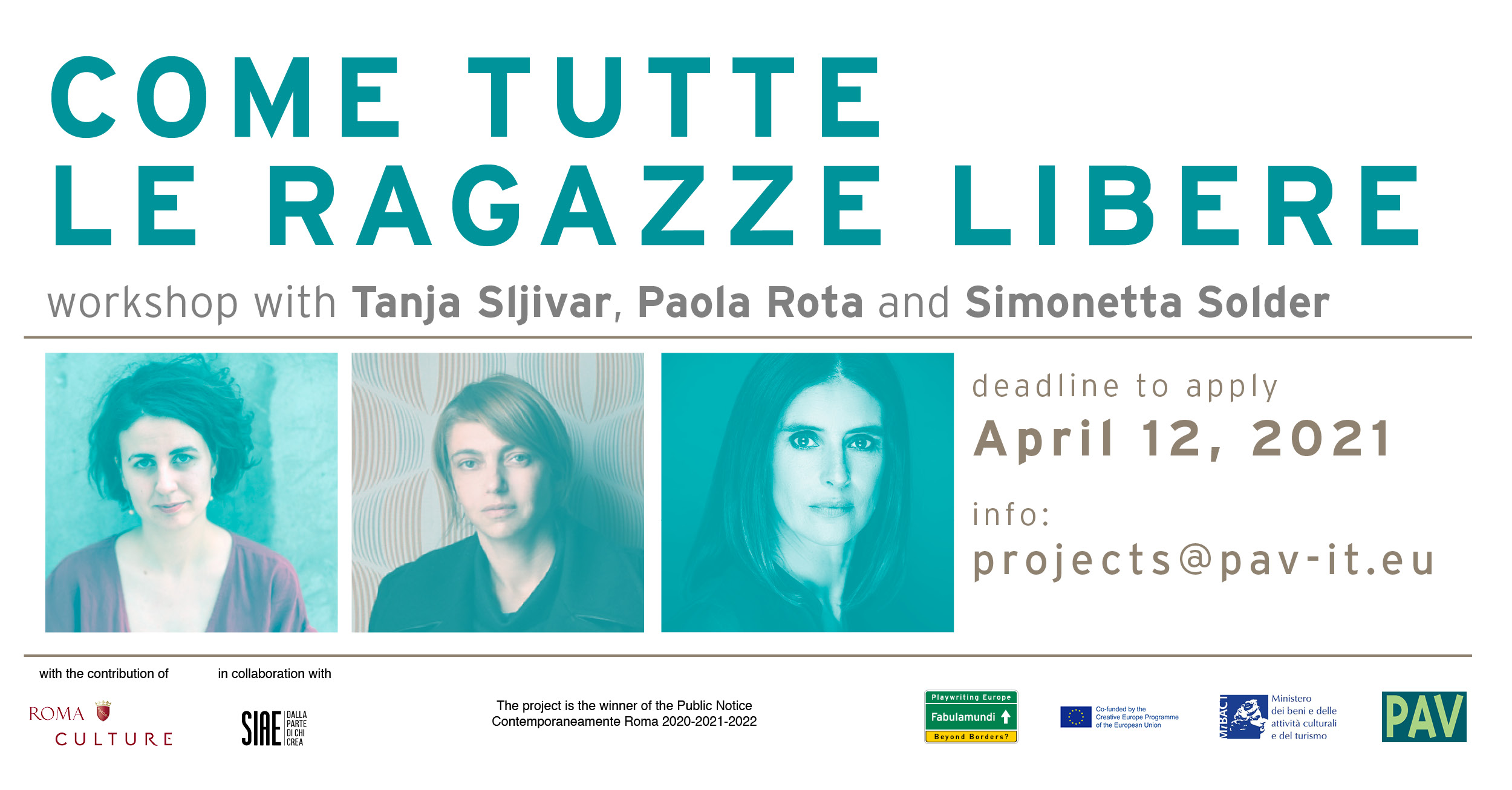 WHEN: April 26-30, from 11 am to 2 pm
WHERE: online sessions on ZOOM
FOR: playwrights, screenwriters, actresses and actors, aged 18-25
MAX NUMBER OF PARTICIPANTS: 8

Fabulamundi Playwriting Europe entrusts the Bosnian author Tanja Šljivar, the Italian director Paola Rota and the Italian actress Simonetta Solder to lead a creative writing and improvisation workshop which, moving from Šljivar’s text Come tutte le ragazze libere, will create a real testing site of the dramaturgical score and its performative possibilities.
Aimed at young playwrights, screenwriters, actresses and actors between the ages of 18 and 25, the laboratory will start from the language of Šljivar, steeped in slang and references to the social world of generation Z, to work creatively and together on writing and its possibilities of speaking, also in preparation for the show that will be produced by the three artists next autumn.

Come tutte le ragazze libere
Seven thirteen-year-old girls, seven scenes and seven monologues form the thematic setting for a drama in which the only constant is the girls’ unreliability when it comes to memories and statements. There are pregnancy tests, Skype, Instagram, American pop culture, grandmothers, critical theory, chauvinistic pornography, the patriarchal environment of a small town and abortion.
Come tutte le ragazze libere is a comedy about the need to leave in order to fully realize one’s sexuality, to be able to make decisions about one’s body and one’s life.
The seven girls want to tell us everything in their monologues, except how they actually got pregnant on a school trip.

Tanja Šljivar was born in Banjaluka, SFR Yugoslavia in 1988. She holds both BA and MA degree in dramaturgy at Faculty of Drama Arts in Belgrade.
She wrote full length plays How much is Pate?, Scratching or How my grandmother killed herself, We are the ones our parents warned us about, But the city has protected me, All adventurous women do and short play Stillborn, which were published, publicly read and produced in professional theaters in Bosnia and Herzegovina, Croatia, Serbia, Albania, Spain, Poland, Austria, Germany. She also writes short stories, radio plays, screenplays for short films and theater-theory texts.
She won several awards for her playwriting, most recently the prestigious Sterija award for the best contemporary play in Serbia, MESS market co-production award for All adveturous women do in Bosnia, as well as the nomination for the Retzhoferdramapreis 2017 for the same play, in Austria. Her plays have been translated into some 10 languages. She has been a guest of writing residencies IHAG in Graz, Austria, Museums Quartier 21 in Vienna, Austria, and Prishtina has no river in Prishtina, Kosovo.
She is currently attending MA course in Applied theater science in Giessen, Germany.

Paola Rota is director. She works as an actress in the theater with various directors including Gabriele Vacis, Elio De Capitani, Ferdinando Bruni, Giampiero Solari, and in cinema with Carlo Mazzacurati, Matteo Garrone, Eugenio Cappuccio. In 2005 she met Luca Ronconi and she became his collaborator director in several shows. Since 2008 she has collaborated with Mario Martone and she works with him in the direction of the Teatro Stabile in Turin as assistant director. She directed Due Partite by Cristina Comencini, Winston versus Churchill with Giuseppe Battiston, Lingua Madre Mameloschn by Sascha Marianna Salzmann and IllegalHelpers by Maxi Obexer within the Fabulamundi Playwriting Europe project.

Italian-Austrian actress and translator. In theater, she works with G. Pressburger, Israel Horovitz and F. Comencini. She is a member of the Horovitz-Paciotto Company. Among the directors with whom she has worked in TV / Cinema: Giacomo Campiotti, Giacomo Battiato, Riccardo Milani, Marco Tullio Giordana, Ivan Cotroneo. Among the prizes won: David di Donatello, Ciak d’Oro, Ennio Morricone Award and “The Golden Arena” for the music of the film You carry me by director Anika Juka.

To apply to this online workshop, you need to be fluent in English and send us your CV or portfolio or a video/voice message in which you tell us about you. In addition, we ask you for a short text in English (max 1 folder) entitled Go back to yours 13 years and tell me: what do you know about you?.
Please, drop us these docs no later than midnight of the March 12th, 2021 at the following e-mail address: projects@pav-it.eu

Participation in the workshops is free with compulsory attendance.

On April 30 at 5 p.m. the presentation of the first study of Come tutte le ragazze libere by Bosnian author Tanja Šlijvar will be broadcast on Zoom, directed by Paola Rota and with Simonetta Solder.
The six participants of the creative writing and improvisation workshop led by Šljivar, Rota and Solder have been involved in this first study of the text.

The project, promoted by Roma Culture, is the winner of the public notice Contemporaneamente Roma 2020-2021-2022 cured by the Department of Cultural Activities and realised in collaboration with SIAE.